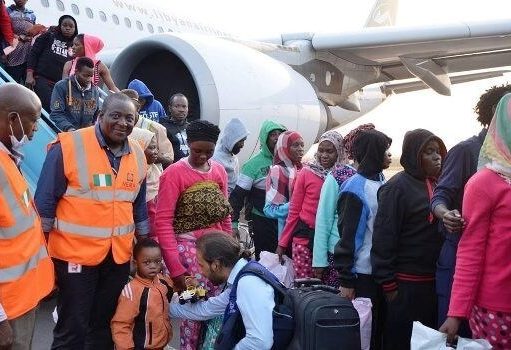 ​In the midst of the uproar over revelations that Libyan nationals are buying and selling migrants as slaves in Libya,
Saturday PUNCH has learnt that Nigerians based in the country also sell their fellow countrymen.
This emerged as more Nigerians are repatriated by the International Organisation for Migration with the backing of the European Union in an ongoing exercise that has seen 1,295 retrieved from Libya in November alone.
Since the beginning of 2017, IOM-facilitated repatriation has brought back 5,578 Nigerian migrants, who were trapped in and outside prisons across Libya.
On Thursday night, 150 migrants from mostly Edo and Delta states arrived the country aboard a Buraq Airplane at the cargo terminal of the Murtala International Airport, Lagos. It was two days after 239 migrants had also been brought into the country.
Many of the returnees, who were thankful for being back, confirmed to Saturday PUNCH that they were sold by their fellow countrymen, who were getting rich in Libya.
One of them, 26-year-old Odion Saliu, a hairdresser from Edo State, said she was kidnapped and handed over to a Nigerian, who forced her to call her mother.
According to her, her mother in Benin paid N200, 000 but she was again sold by the same Nigerian for 3,000 dinars (about N794, 000).
Saliu explained that the Nigerians spoke Pidgin English and some Nigerian languages.
She said, “When I was kidnapped with others and held for some weeks, the Arabs asked if I wanted to be taken to a Nigerian and I readily said yes. I was very happy that I was going to someone from my country. But it was a lie.
“The Nigerian they took me to locked me in a cell and told me to call my mother and ask for N60, 000. The man said he would sell me to a connection house if my family did not get the money. I called to inform my mother and the trafficker who facilitated my journey from Nigeria.
“But the trafficker spoke with them on the phone and told them the amount they demanded was too small. They increased it to N200, 000. My mother paid into an account after they provided her with the account number over the phone.
“The Nigerian said if I wanted to cross the sea, I had to pay him again. But when we got to the seaside, he sold me again.”
Another Edo State indigene, Sunday Anyaegbunam, left Nigeria along with his wife in April.
He said during their nine-day journey through the desert, they were sold twice by Nigerians.
According to him, when their Nigerian “burger” (trafficker) sold them to another set of Libyan traffickers at Agadez, Niger, the traffickers sold him and his wife to a Nigerian who took them to Sabha, Libya, where they were separated in different cells.
“We were made to contact our families on the phone and I had to ensure the payment of N400, 000 for my release and N300, 000 for my wife,” Anyaegbunam said.
Like others, he could only identify the Nigerians trading in their countrymen in Libya through the Nigerian languages they spoke and their accent.

He said, “The Nigerians selling people in Libya are more wicked than many of the Arabs. I have never seen people so heartless as the Nigerians who bought and sold me.
“There are many of them in Agadez and Sabha, who are making so much money from selling their own people. But there are other West Africans doing the business too.
“When you approach them and say, ‘Please, my brother, help me.’ They would tell you, “No brother in the jungle.”
A 25-year-old woman, Esosa Osas, who was in Libya for six months, said she also met many Nigerians selling their countrymen.
“You dare not talk to them, else they would beat you and lock you up. They sell women for 5,000 dinars and men for N4, 000 dinars. I noticed that the connection houses were also controlled by Nigerian women.”
All these accounts were corroborated by 35-year-old Harrison Okotie who lived in Libya for three years until his repatriation.
“Nigerians and Libyans are doing the business like they are one big happy family,” he said.
Most of the migrants who arrived Nigeria on Thursday were from Edo State.
Officials of the state’s task force on illegal migration were on hand with luxurious buses to transport their people back home.
A member of the task force, Mr. Okoduwa Solomon, told Saturday PUNCH that his team had made six such journeys to the airport within the last one month to take their indigenes repatriated from Libya back home.
He said, “The first process is to take them through counselling, then we profile them.
“After that, we put them in a home that the state government has provided for the returnees. The Edo State Government is paying each of the returnees from the state a stipend.
“They are going to undergo a training in agriculture, poultry, fishery and others to make them useful to themselves and the system.”
Officials of the National Emergency Management Agency coordinate the reception of the returnees at the airport.South West Zonal Coordinator of the agency, Mr. Yakubu Sulaiman, said the returnees would be lodged in a hotel where they would have the chance to clean up before their journey back home.
Meanwhile, President, Women Arise and Centre for Change, Dr. Joe Okei-Odumakin, has called on the Federal Government to use all diplomatic channels to prevail on the Libyan authorities to ensure the dignity of our people.
She said in a statement on Friday that it was an embarrassment that Nigerians who were treated like royalty in the past were being dehumanised in a foreign land.

“We must build a country where our people have opportunities to prosper and lead useful and productive lives and will only travel on leisure and business and not as illegal migrants desperate to live anywhere other than Nigeria,” she said.