Nobody is happy in Igboland, Ndigbo are conquered people, political slaves in Nigeria - Elliot Uko 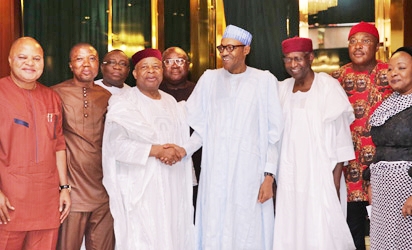 Secretary General, Eastern Consultative Assembly,  Elliot Uko, has said the international community is being misled that actually there is no peace in Igboland.
He stated this while answering questions in a chat with The Sun. Uko Elliot further said what Igbos have been suffering in Nigeria is an imposition of leaders which were decided firstly in Lagos and later in Abuja.
As a result of this sad and unfortunate development, according to him, no one is happy in the region.
The diehard pro-Biafra supporter further lamented that region - the southeast is deeply troubled and has been suffering from imposed leadership in the past 47 years from Gowon era to this day.
Excerpt:

Why is the South East troubled?
The region is troubled. There is the peace of the graveyard. The Federal Government and the international community are misled by the silence. They mistake the silence of the people for acquiescence.Nobody is happy in Igboland. The problem with the South East has always been imposed leadership; either imposed directly or imposed through a manipulated electoral system, but imposed all the same.  About 47 years ago, Gen Yakubu Gowon (rtd) imposed the late Anthony Ukpabi Asika on Ndigbo, and he led East Central State for nine years. That culture of imposing leadership on Ndigbo has persisted up till date. The only difference is that, this time around, the security will vet some people, they will be allowed to run for elections; INEC will conduct elections, the money will exchange hands, and powerful influence-peddlers and carpet-baggers from other zones will impose someone here in the east, and INEC will announce him the winner. The results are written, sometimes in Government Houses, sometimes in hotel rooms, and they are announced, but they are all imposed on us. Igboland has been suffering from imposed leadership.
Anthony Ochefu replaced Asika. Few months later, John Atom Kpera replaced Ochefu. And ever since then, they have been imposition of leaders on Igboland. Later, they brought Datti Sadiq Abubakar for Anambra and then Sunday Adinihun for Imo, before the advent of Mbakwe and Jim Nwobodo.
They were all imposed by cabals – Supreme Military Council, Armed Forces Ruling Council, or Provisional Ruling Council, but those cabals of the military are usually of northern extraction, who would sit down in Lagos or Abuja and impose leaders on Ndigbo.  This culture of imposed leadership has been going on in Igboland for over 47 years. It has destroyed our values, destroyed our future, and kept Ndigbo in political prison. What we have now is a different kind of imposition, where the police play a role, INEC plays a role, security plays a role, and political leaders play a role. For the past 16 years, leaders in Igbo and were decided in Wadata House, Abuja. That Wadata House would decide who to run for Senate in Igboland, who would be governor. No matter how popular you may be, if Wadata House does not like you, when your people organize their own primaries to vote for you, Wadata House will send representatives from INEC, they will go to one hotel, and they will elect who Wadata House has chosen. That person will be imposed on us as a Senator, whether we like it or not. Ndigbo areconquered people, political slaves in Nigeria. The culture of imposed leadership has brought us to where we are today – the weeping baby of Nigeria. One of the most gifted people in the world cannot find their bearing politically.
Follow Us on Twitter!