Home » news » Nigerian Returnee Opens Up – They Use Us To Carry Bombs, Libya Is Hell On Earth

Nigerian Returnee Opens Up – They Use Us To Carry Bombs, Libya Is Hell On Earth 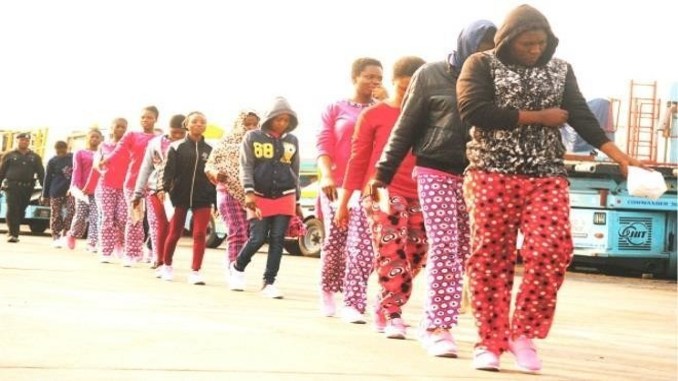 Nigerian migrants were filled with joy and expressed relief as they arrived home yesterday, Tuesday 5th of December 2017 from Libya, describing the “hell” of harsh conditions in detention camps where they had been held.
African heads of state have condemned the treatment of undocumented migrants in Libya, including widespread violence and apparent slave trading.
The 144 returnees who touched down late Tuesday, and another planeload expected to land shortly after, are part of a repatriation programme that Nigeria has stepped up in recent months.
One man who gave his name as Franklin told AFP that he was “very, very happy” to return.
“It’s good to be home, because I’ve been in hell in the land of Libya. I’ll start a new life in my country,” he said as he waited to be given food.
The UN has urged Libya to agree to shut down 30 centres holding 15,000 migrants, whose detention has become a pressing issue after video footage showing African men sold in Libyan slave auctions sparked global outrage.

“Thank God, thank God, thank God,” said one young man as he stood in an orderly line at the airport to be registered first by immigration officers and then by the National Emergency Management Agency.
Nigerians make up the majority of undocumented migrants trying to make the treacherous crossing via the Mediterranean Sea to Europe.
Their repatriation began nearly a year ago but numbers have increased recently, with nearly 1,300 brought home in November, according to NEMA.
Another returnee, Omoburo, said he had been held in a Libyan detention camp for nearly nine months before he could return home.
“They used us to do all sort of things, to carry bombs, to carry ammunition, even to ‘pack’ dead bodies,” he said as he stood in front of a large poster of Nigeria’s first lady Aisha Buhari extending a warm “welcome” to the group.
It was reported that up to 70% of the Libya returnees are from Edo state
Follow Us on Twitter!