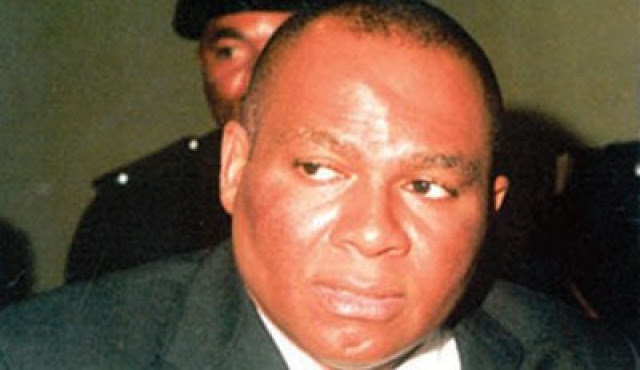 A judge, Chuka Obiozor of a Lagos Division of the Federal High Court on Monday issued a bench warrant for the arrest of Chimaroke Nnamani, a former governor of Enugu State.
Mr. Nnamani, who was governor between 1999 and 2007, is facing a 10-count charge of laundering N5.3 billion instituted by the Economic and Financial Crimes Commission.
The judge also ordered the arrest of Mr. Nnamani’s aide and co-accused, Sunday Anyaogu.
“There is no evidence shown to the court as to why the defendants are absent, there is no justification for the the continued absence of the defendants,” said the judge.
“In the absence of any convincing evidence, it is hereby ordered that a bench warrant be issued against the defendants and summons to their sureties to show cause.”
Mr. Obiozor adjourned till December 14th for the re-arraignment of the defendants.
Both defendants were first arraigned in 2007 alongside their companies: Rainbownet (Nig) Ltd; Hillgate (Nig) Ltd; Cosmo FM; Capital City Automobile (Nig) Ltd; Renaissance University Teaching Hospital; and Mea Mater Elizabeth High School.
In 2015, all the companies pleaded guilty to the charges but the trial of Messrs Nnamani and Anyaogu continued to stall due to the former’s frequent travels abroad to treat an heart ailment.
On Monday, Mr. Obiozor, the fourth judge to handle the matter, made it clear to the defence lawyer that he would not tolerate any attempt to further delay the trial.

“It is not a case of more haste, less speed,” the visibly angry judge began.
“The defendant may not be guilty but the matter must be heard in court. After ten years, we are still talking about arraignment and re-arraignment and tomorrow we’ll see the headline that the judiciary is to be blamed.”
Earlier, Shamsudeen Abubakar, counsel to Mr. Nnamani told the court that his client, who is “severely sick,” had just had a heart surgery in the United States and is still recuperating in hospital.


“We received the hearing notice to appear before you in respect of this matter just last Thursday,” Mr. Abubakar, a lawyer from Ricky Tarfa Chambers, informed the judge.
“Unfortunately, the first defendant (Mr. Nnamani) is bedridden in a hospital in America. When this matter came up on 30th November, we tried to reach out to the family.
“I was reliably informed that the defendant had a heart surgery and we wanted to get a medical report but unfortunately we could not.”
Mr. Abubakar noted that his client had regularly attended his trial and that his absence was not a deliberate act.
Asked by the judge why Mr. Nnamani stopped attending trial since 2015 when “his surgery was only last month”, the defence lawyer said it was the period the companies pleaded guilty to the charges.
“The first and second defendants are appearing in this case on their personal capacities and have nothing to do with the companies’ guilty plea,” the judge said.
“I’m not for or against anybody. You tried to reach the family of the first defendant and could not but you were aware he went to surgery.”
Kelvin Uzozie, counsel to the Economic and Financial Crimes Commission, informed the court that the photographic evidence by the defence lawyer to prove Mr. Nnamani’s recuperation in a US hospital had been in circulation since 2014.
“I don’t need to tell the defence lawyer what to do, the (defendants’) sureties are supposed to be here to show cause as to why the defendants are not here.”