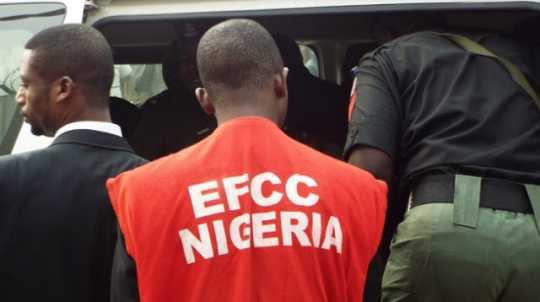 ​The Economic and Financial Crimes Commission, EFCC, Thursday told the Federal High Court in Abuja, that payment for $40million contract that was awarded to Azibaola Robert, cousin to former President Goodluck Jonathan was dully approved by the presidency.
Azibola and his wife, Stella, are currently answering to a seven-count criminal charge the EFCC preferred against their firm, Oneplus Holdings Limited.
At the resumed hearing, the 10th Prosecution witness, PW-10, in the case, Mr. David Mkpe, who is an EFCC operative that investigated the deal between the company and the Office of the National Security Adviser, NSA, told trial Justice Nnamdi Dimgba that he was aware of a Presidential memo approving both the contract and payment for the job.
Mkpe, who was cross examined by the defence counsel, Mr. Chris Uche, SAN, told the court that his investigative team case across the memo from the ONSA, which he said okayed the payment of $40 million to Oneplus Holdings Ltd.

Asked if he saw the memo from ONSA through which the payment of $40m was made to Oneplus account, Mkpe replied, “Yes, my lord. The payment was duly authorised by the NSA.”
He said: “My lord funds from which the $40m was paid to Oneplus came from NNPC funds. In March 2014, Lt-Col Sambo Dasuki (rtd) wrote a memo to the President entitled “Intervention in Urgent National Security Project” through which he sought the approval of Mr. President for the sum of $1bn for subheads and surveillance of pipelines and additional request for $250m.
“The President gave approval to his request. The President approved the release of the sum of $1.2bn. In May the sum of $1.2bn was then released from NNPC accounts.
“ It was this fund that was disbursed to various recipients. The $40m was part of the $1.2bn statutorily approved and released for urgent national security intervention. I can confirm.”
The offence, according to the EFCC, contravenes Section 8(a) of the Money Laundering (Prohibition) Act, 2011 as amended in 2012 and punishable under Section 15 (3) of the same Act.
Justice Nnamd Dimgba has adjourned the trial to 22 and 23 January 2018 to enable the defence to cross-examine more of the prosecution witnesses.
Follow Us on Twitter!