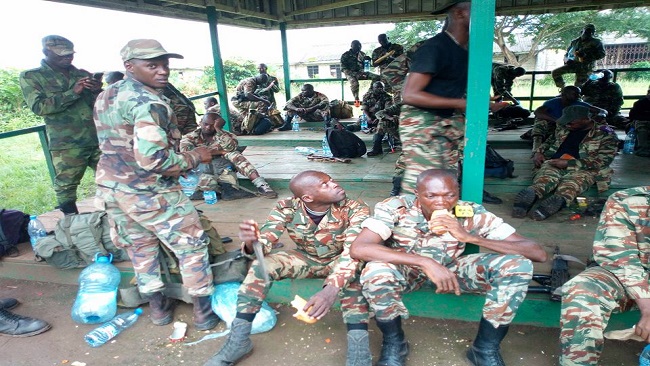 Cameroon’s government ordered thousands of villagers to leave their homes in the Anglophone Southwest region as it deploys troops to root out armed separatists who have vowed to loosen President Paul Biya’s long grip on power.
The deployment marks an escalation of Biya’s year-long crackdown on peaceful protests in the English-speaking Northwest and Southwest regions.
Agbor Valery, a lawyer in Mamfe, which is near some of the evacuated villages, said the government was using force to confront an insurgency that had sprung up alongside the civil unrest.
The separatists have killed at least eight soldiers and policemen over the past month as part of their campaign to break from the capital Yaounde in Francophone Cameroon and form a separate state called Ambazonia.
Paul Biya, president of Cameroon since 1982, has brutally suppressed Anglophone Cameroonian activists
Authorities of the Manyu Division in the Southwest on December 1 gave the order to evacuate 16 villages across the region.
They warned that anyone deciding to stay “will be treated as accomplices or perpetrators of ongoing criminal occurrences.”
Motorbikes, a preferred mode of transport for separatist attackers, were ordered off the roads between 7 p.m. and 6 a.m.
“People ran helter skelter when they saw the statement,” said Valery.
He said people were afraid of being rounded up and put in jail, as has happened since September in other areas of the English-speaking part of the country.
“If you go to the villages, everyone has fled. Only the old people stayed. The streets are quiet. They are highly militarised. At night, you hear gunfire.”
Valery said he saw hundreds of troops and truck loads of military equipment arrive in Mamfe on Sunday that were then deployed to the surrounding villages.
Reuters was unable to independently verify his account; but two military sources in the city of Bamenda in Northwest region confirmed that additional security forces have been deployed in the English-speaking regions.
The separatist movement compounds problems for 84-year-old Biya, who has ruled Cameroon since 1982 and plans to stand for another term in 2018.
The economy has slowed sharply since 2014, while attacks in the Far North region by Islamist militant group Boko Haram have strained the military.
The fall in November of Zimbabwe’s leader Robert Mugabe after decades in power highlights the potential vulnerability of Africa’s long serving rulers amid a growing grassroots push for strict term limits for presidents.
On December 1, Biya vowed to flush out secessionists, whom he called “criminals.”

Defence minister Joseph Assomo said on Monday the new deployment would “prevent terrorists from harming others.”
Violence has spiraled since 2016 when government forces crushed peaceful protests by Anglophone teachers and lawyers protesting their perceived marginalisation by the French-speaking majority.
The heavy-handed government response fuelled support for the separatist movement, which has existed on the fringes of Cameroonian politics for decades. The response has also forced thousands out of their homes.
No fewer than 5,000 have fled Anglophone Cameroon across the border to Nigeria since October 1, the UN said.
UN refugee agency said it was making preparations for up to 40,000 refugees.
Abia David told Reuters that he left Bamenda in Northwest Cameroon on October 27 amid widespread arrests in the town.
He heard from friends that the police were coming to arrest him because he is a member of an opposition political group.
To escape Bamenda, and avoid its increasingly crowded jail, he cycled 16 km into the countryside to the head of a bush road. From there, he walked some 100 km alone north through a series of remote villages towards Nigeria.
“There was no time to carry food. I had one change of clothes but I lost that.”
He slept on strangers’ floors and arrived in Nigeria a week later, where he fell ill with malaria. He said NGOs on the border had estimated an extra 1,000-odd people had arrived since the weekend.
The UNHCR is offering provisions such as mosquito nets and is helping refugees find housing. So far, there is no central camp for refugees and they rely on the hospitality of Nigerians for room and board.

For David, it beats going home. Asked if he planned to return, he said: “Go home to where? Go home to be killed? To go to jail without trial? I can only go back once this is resolved.” (Reuters/NAN)