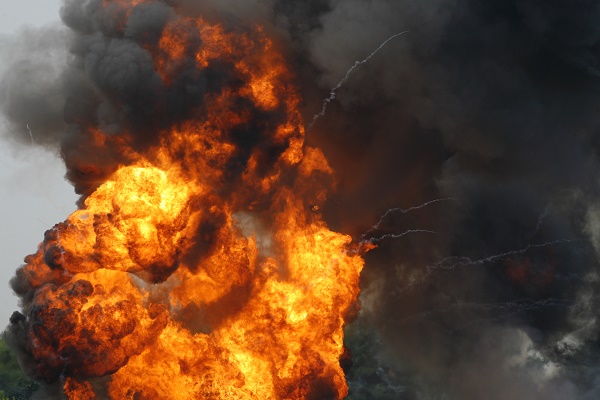 The city of Umuahia, the Abia State capital was thrown into panic and confusion on Sunday when from an explosion that sent everything at six and sevens destroying a missionary school building in the neighbourhood.
The explosion occurred at Saclux Paints Industry. Mr. Emeka Okereke, the owner of the school, known as Love for Africa Mission, revealed that a tanker, allegedly bearing ‘black oil’ exploded inside the company’s premises around 1 pm.
He said that the fire started with an explosion shortly after they ended the Sunday service at the school.
“We ended the Sunday service around 12:15 pm and I was trying to lock up the gate, when I heard a heavy explosion, accompanied with billows of heavy smoke and fire moving up the sky.
“The incident caused panic and stampede as everyone of us scampered into different areas, including the nearby bush, for safety,” he said.
He said that the fire later spread into the school building, which doubles as his family residence, when oil from the exploded tank spilled into the compound.
He said that as the fire raged, some youths in the area made attempts to move into his building in order to rescue some valuables.
Okereke said that he restrained them because he feared that they might be trapped inside the building.
“But when they insisted and attempted to pull down the entrance gate, I gave them the key with which they entered the compound,” he said.
He said that the sympathisers succeeded in pushing out the two jeeps that were parked in the compound.
He said that he could not ascertain the extent of damage, saying that no other property was recovered from the building.
An eyewitness account said that a fire fighting equipment from the state fire service came to the scene but could not control the fire due to insufficient water in the machine.
The fire fighters returned to the scene and eventually put out the fire with the assistance of a commercial water tanker driver in the area.
Some residents of other buildings close to the factory evacuated their belongings for fear that the inferno would spread to their houses.
One of the fire fighters, who spoke on the condition of anonymity, said that they encountered logistics problems in their efforts to put out the fire.
The Police Public Relations Officer of the state, Mr Geoffrey Ogbonna, confirmed the incident on phone.
Ogbonna also said that no life was lost in the incident and that the fire had been successfully controlled.
Follow Us on Twitter!