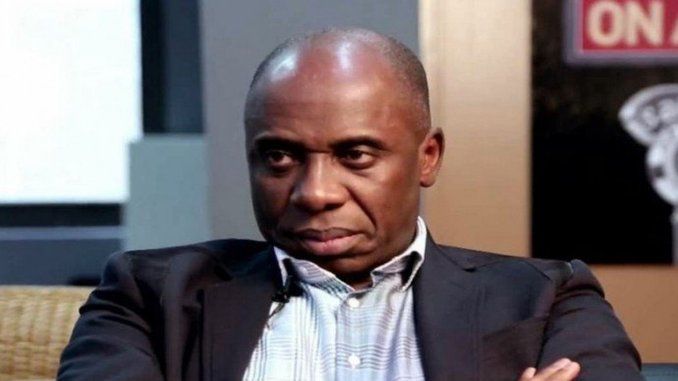 Senator Magnus Abe has vowed not to leave the APC, he said no matter the provocation, he will continue to stay
He accused Amaechi of being responsible for the problems in the party Senator Magnus Abe representing Rivers Southeast senatorial district in the National Assembly has vowed not to leave the All Progressives Congress (APC).
The senator’s sore relationship with the minister of transportation, Rotimi Amaechi, has threatened the peace of the party in Rivers state. Vanguard reports that in a statement by his spokesperson, Parry Saroh Benson, Abe said the genesis of the problem could be traced to a meeting convened by Amaechi in Port Harcourt in March.

He said the minister made certain remarks that led to crises in the party. He said: “I will not leave the APC even in the face of needless provocation and unwarranted bitterness.
As I told the state Chairman of the party, last Sunday, every member of the party knows the cause and the reason for the present crisis in the APC in Rivers State and I will also state it here.”
“The Minister of Transportation made several shocking pronouncements that heralded the root of our present crisis. He publicly declared that Senator Magnus Abe and Dr. Dakuku Peterside were both running for governor, and that he had ordered both of them to stop.
He said Dr. Peterside had stopped and Senator Abe had not, and that anyone supporting Senator Abe should leave the party immediately. He went on to name party leaders sympathetic to Abe and declared that they must leave the party.
“The Minister declared at that meeting that anyone who failed to show absolute loyalty to him personally should receive no benefit or recognition from the party whatsoever, including contracts and patronage.”