Home » opinion » 2019; I’ll Not Distract Buhari – Tinubu Says As He Denies Being After Osinbajo’s Job

2019; I’ll Not Distract Buhari – Tinubu Says As He Denies Being After Osinbajo’s Job 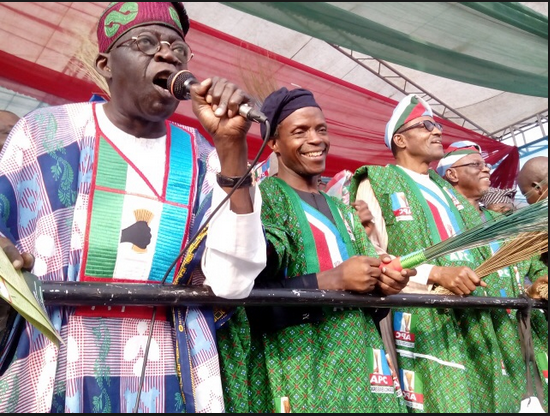 National Leader of the All Progressives Congress, APC, Asiwaju Bola Tinubu has described as fake news a newspaper report that he is to pair President Muhammadu Buhari in the 2019 presidential ticket of the party.
Tinubu, in a statement yesterday, said the report which envisaged that Vice-President Yemi Osinbajo was returning to full-time pastoral work was without empirical or logical basis. Affirming that he had full confidence in the pair of Buhari and Osinbajo continuing through 2019, Tinubu, in the statement issued by his media office, said the present administration was making progress despite challenges supposedly accumulated during what he called the years of the locust when the Peoples Democratic Party, PDP, held sway in government.
The statement reads: “There is no empirical or logical basis for this mischievously speculative story. Is it even conceivable, as the story recklessly insinuates, that Vice President Yemi Osinbajo would be considering returning to full church work rather than run with his boss, President Buhari for a second term if the latter so decides without as much as discussing such a sensitive issue with his party and with Asiwaju Tinubu?

In any case, is this story not entirely unwarranted and indefensible as the Buhari/Osinbajo ticket has an electoral mandate of four years out of which it has spent only over two years and a half years?
“This is clearly an attempt to distract the APC Federal Government from the yeoman’s job it has been doing in rescuing the country from the deep-rooted socio-economic, political, security and moral mess inherited from the PDP’s 16 years misrule of Nigeria, instigate crisis within the party, stoke dangerous embers of religious disaffection within the party and the country generally and stem the remarkable progress being made in the reinvention and revitalization of Nigeria. “There is greater sanity, accountability and transparency in the management of the country’s finances.

The Boko Haram insurgency has been substantially contained. We should not allow ourselves to be derailed from the job we are effectively undertaking in fulfilling our campaign promises anchored on the tripod of containing insecurity, taming the scourge of corruption and resuscitating the economy.
I’ll not distract Buhari, Osinbajo
“The Buhari and Osinbajo-led Federal Government are deftly steering the country out of an economic recession that was the result of the ineptness of the PDP years of the locusts. Asiwaju Tinubu will never support any attempt to distract Buhari and Osinbajo from the job they are passionately doing through the kind of false report carried by the The Sun. In particular, this story does great injustice to Vice President Osinbajo.
Here is a man of the highest integrity, moral rectitude, amazing humility, high intellect and unimpeachable credibility. Here is a man of fierce loyalty and absolute trustworthiness who will never do anything in word, thought or deed to undermine his boss.
”His unquestionable dependability and indisputable fidelity to his oath of office were demonstrated beyond question by his honourable conduct during the President’s medical vacation.
“Asiwaju Tinubu and the people of the South West have absolute confidence and are exceedingly proud of the excellent job Professor Osinbajo is doing as Vice President of Nigeria.”
Follow Us on Twitter!