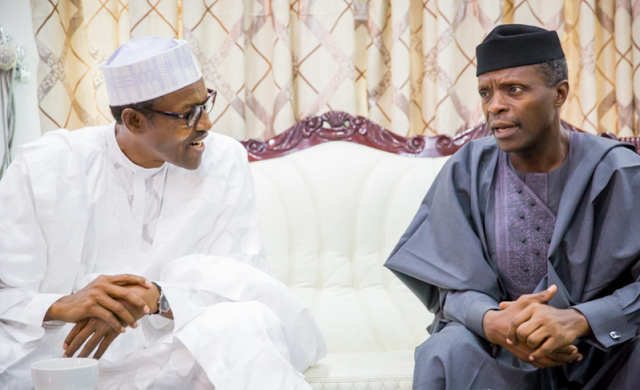 Fourteen months to the next presidential election, there are indications that the ruling All Progressives Congress (APC) may have  President Muhammadu Buhari-Asiwaju Bola Tinubu ticket, as one of its jokers for the 2019 election.
Competent sources close to The Redeemed Church told Daily Sun that Vice President, Yemi Osinbajo, may have indicated to the church authorities that he would not be averse to a return to pastoral life.
He is a senior pastor of the church conglomerate.
Although president Buhari is yet to officially declare his bid for re-election, apart from a recent declaration that he may seek Nigerians’ votes again, it was gathered that Osinbajo’s replacement with Tinubu is being mooted as a way to have a solid South West support for the APC, in the face of a South East-South-South alliance in the opposition Peoples Democratic Party (PDP).
Competent sources said the APC and Buhari tendencies in the party, which want another victory in 2019, reasoned that it is important to rally the South West behind the president.
It was gathered that towards this end, the Buhari tendencies recommended that a more popular politician from the South West should pair with the president in 2019.
The name of Tinubu came up as it is believed that he is the only singular South West personality who could effectively mobilise support for Buhari and the APC in the zone.
Those pushing for this said with South South and South East strongly behind PDP, the APC needs the South West to counter-balance the structure in the South.  Tinubu’s VP candidacy is believed to guarantee this.

Those in the know revealed that the recent rapprochement between Buhari and Tinubu was geared towards “concretising the arrangement” of having two of them as presidential and vice presidential candidates in 2019.
Daily Sun gathered that until recently, the relationship between Buhari and Tinubu was frosty. Afraid that this may jeopardise Buhari’s re-election, the president’s political strategists recommended the wooing of the former Lagos governor.
Sources revealed that the wedding of Senate President, Bukola Saraki’s daughter in Lagos, recently, paved the way for emissaries from the Buhari camp to meet with Tinubu.
After the Lagos meeting, during Saraki’s daughter’s wedding, Tinubu was invited by the Presidency to grace the public presentation of a book on Buhari’s achievements. Thereafter, Tinubu accompanied Buhari on a trip outside the country, where further meetings on 2019 elections were held.
Apparently, after weighing the options, the Buhari-Tinubu ticket came into consideration.
Meanwhile, Tinubu’s camp has denied the existence of any such arrangement.
Although efforts to get Tinubu’s media aide, Mr. Tunde Rahman, to speak on the development proved abortive, a senior member of Tinubu’s camp said: “we dont have anything to say on the matter now,” but added: “let’s talk more on this later in the day.”  That was yesterday.
He, however, refused to get back to our reporter as promised. Several calls to his mobile line were not asnwered.

This is not the first time the APC would moot the idea of a Muslim-Muslim ticket.
In the run up to the 2015 election, Tinubu left no one in doubt that he was desirous of running with Buhari. It was gathered that Buhari, at the time, had also conceded to Tinubu before some party chieftains, but, some powerful forces in the party, including Saraki, frustrated the plot.
Saraki would later lend credence to this fact in April 2016, when he tried to explain why Tinubu was after him.
He said: “… I have also been accused of helping frustrate some people’s opportunity to emerge as president Muhammadu Buhari’s running mate. But, I have no problem with anybody. My concern was that it would not be politically smart of us to run with a Muslim-Muslim ticket.
“I doubt if we would have won the election if we had done this, especially after the PDP had successfully framed us as a Muslim party. I felt we were no longer in 1993. Perhaps, more than ever before, Nigerians are more sensitive to issues of religious balancing. This, my brother, was my original sin. What they say to themselves, among other things, was that if he could conspire against our ambition, then, he must not realise his own ambition as well. For me, however, I have no regrets about this. I only stood for what I believed was in the best interest of the party and in the best interest of Nigeria.”
Later this year, Tinubu also confirmed what had long been dubbed mere speculation when he revealed that Saraki and the Kaduna State Governor, Mallam Nasir El-Rufai, worked against Buhari’s plan to make him his running mate, in the run-up to the 2015 presidential contest.
Tinubu, in the book “Against the Run of Play,” written by the Chairman, Editorial Board of ThisDay, Olusegun Adeniyi, which was presented to the public this year, said Saraki, El-Rufai and other senior members of the PDP, who joined the APC, in the build-up to the 2015 general elections, were the ones who instigated Buhari and some APC chieftains not to pick him as running mate.
He said: “What they (Saraki and others from the PDP) did behind my back was wrong. We always do things as a group. By the time they joined, we were already too far ahead in our processes, but, we accommodated them.
“We agreed to take their state structures and subsume them into the party and they all had their opportunity to nominate the candidates of their choices for different political offices. But, they went behind to instigate Buhari and some other people in the party against me on the pretext of religion. That was not right. They were canvassing arguments that the Christians in the North would not vote for a Muslim-Muslim ticket. Nasir el-Rufai was also selling the same argument within the CPC (the defunct Congress for Progressive Change) because, at that point, he still wanted to have Pastor (Tunde) Bakare brought in as Buhari’s running mate.”
Also, Osinbajo’s men refused to respond to calls and SMS sent to them for comments.
As at the time of going to press, Osinbajo’s spokesperson, Laolu Akande, had yet to respond to the SMS sent to him, including telephone calls.
But, a source close to Osinbajo’s camp told Daily Sun, “you guys are just underrating that man. Don’t underrate Osinbajo; he is capable of being his own man when it matters most.
“Are you aware that that period Buhari was sick, when many thought he won’t return, moves were on to make the VP run in 2019, with a northern candidate? So, how will you now conclude it will be easy to just shove such a man aside? Have you also thought of what the reaction from the Christian community would be? All these are things that will come into play, in taking this decision. Till then, let’s leave it at that for now,” the source said. (THE SUN)