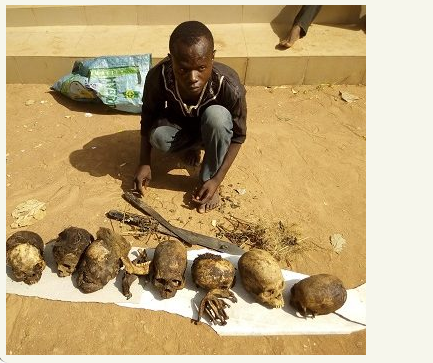 During his interrogation, the suspect said that the escaped suspect initiated him into the crime, adding that they meant to use the seven human skulls for the money-making ritual.
The state police command also paraded five other suspects, including a serving Nigerian Army sergeant who was allegedly caught for theft of a brand new green colour Land Rover jeep belonging to minister of state for Niger Delta, Professor Claudius Daramola.
The police commissioner, who described the suspect as an interstate armed robbery gang, said that the suspects had stolen the vehicle at the residence of the professor at Tanke area of Ilorin metropolis.
He said that the suspects, arrested along Ilorin-Ajase Ipo road by a team of Safer Highway operatives of the command, had earlier been alerted to the movement of the gang.
The police boss said that the military man and the other suspects had confessed to the crime, described the military man as a deserter.
Mr Ado also paraded three-man robbery gang, who allegedly specialised in using their taxi cab to snatch exotic cars in the Ilorin metropolis.
The police boss, who said that the gang usually used their taxi cab to overtake and force their target to stop before dispossessing victims of their vehicles, added that the suspects had been suspected cattle rustlers before graduating to car snatching.
Follow Us on Twitter!