You Are Crude, Hungry And Uncultured: FGGP Blasts Femi Fani-Kayode 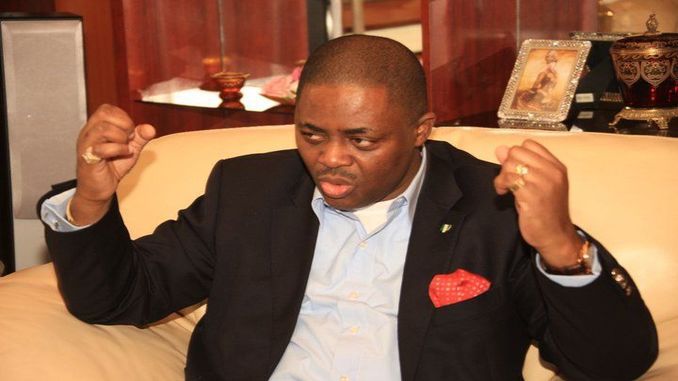 A United Kingdom Based good governance group, The Forum for Good Governance and Probity (FGGP) has described the former Minister of Aviation and one of the court jesters of the defeated ex-President Goodluck Jonathan, Mr Femi Fani-Kayode as crude, witless and uncultured over the article he wrote where he described the Vice President of Nigeria, Professor Yemi Osinbajo (SAN) as a ‘poisonous dwarf and unrepentant son of perdition’.
In a statement made available to NEWSFLASHNGR.COM by the President of the Forum, Mr Jacob Ogunseye, the former minster was described as a hungry and misguided individual that should not be accorded any respect and whose opinion should be considered irrelevant, thoughtless and irresponsible. Mr Fani Kayode is unduly angry in view of financial loopholes and drain holes presently being closed and blocked by the Buhari administration.
“The hunger-induced article released by Fani Kayode popularly known as Jonathan’s jester in the era of the PDP locusts, where he used the physical stature of the Professor as an assault was demeaning. It was crude and absolutely unexpected from the person of Mr Fani-Kayode who professes Christianity and believed in its teaching to use the attribute which only God can create as a means of assault on another fellow”.
“It was callous to have described Osinbajo as a liar when all he said was the truth and nothing but the truth. What evidence has Kayode acquired or provided to query the non withdrawal of the said amount for instance? Former President Goodluck Jonathan is alive; he should have left the ex-President to respond to such weighty allegations, but to our utter surprise, up till today, neither the former President nor any of his ex-senior ministers has considered it fit to issue a denial.
Ogunseye said that though FGGP expect all Nigerians to respect their leaders but since Mr Femi Fani-Kayode has chosen otherwise and toe the path of ignominy, he can pursue his course without any hindrance since we live in a democratic society.

“Mr Fani-Kayode should respect the office of the Vice President but since he has chosen otherwise, he is free to do so after all, he once referred to his today’s bosom friend as a “President without Balls’
It is obvious the attention seeking court jester, sickly and corruption-prone Fani-Kayode is up to nothing but recognition. He once said this about Goodluck Jonathan when his popularity was waning, “May God bring us a real leader that can save our nation and may He take away this one who feels no pain and has no empathy when Nigerian blood, nay even the blood of innocent children, is shed with impunity. Under the tenure of our “lamb” President, more innocent Nigerians have been slaughtered by terrorists than at any other time in the history of our country except during the civil war.”
“Nigerians should ignore the ignoble hatchet job of a jobless self ascribed leader like the Ife born ‘politrickian’, FGGP counsels.
FGGP would like to reiterate President Buhari’s call for Nigerians to exercise restraint, tolerance and mutual respect in airing any grievances and frustrations. Whilst the ongoing national discourse on various political issues is healthy and welcome, we must not forget the lessons of our past.
We believe that the vast majority of Nigerians are descent citizens that would rather tread the path of peace and prosperity, as we continue to uphold and cherish our Unity in Diversity.
We must, therefore, all work together to protect and sustain this APC-led CHANGE to create a new Nigeria that Professor Osinbajo, Vice President of Nigeria, has been part of and worked very to build and sustain.
Follow Us on Twitter!