Home » news » Wow!! This Is Simply Unprecedented; See Sea Of Heads – No Candidate In The November 18th Election Can Ever Pull The Kind Of Crowd That Always Gather To Support Sir Obiano {Photos}

Wow!! This Is Simply Unprecedented; See Sea Of Heads – No Candidate In The November 18th Election Can Ever Pull The Kind Of Crowd That Always Gather To Support Sir Obiano {Photos} 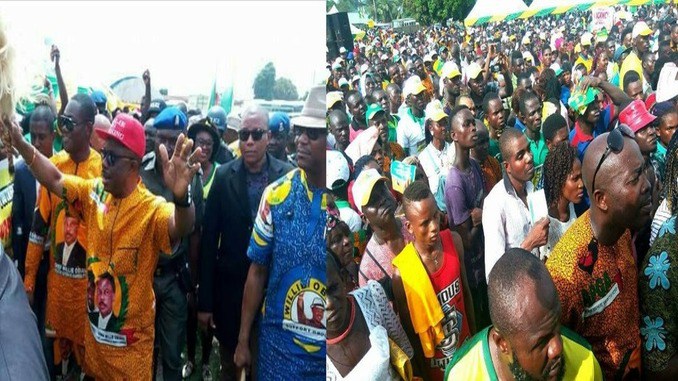 As reported by Ifeanyi Aniagoh the SA to the current governor of Anambra state who tagged the mamonth crowd that welcome sir Willie Obiano in Ayamelum as “simply unprecedented”
Wow wow wow… See sea of heads… The people’s love for Obiano is everywhere you go!
Reporting for NEWSFLASHNGR.com Live from Ayamelum local government area of Anambra State.
The good people of agrarian local council, in a grand style, just received the Willingly Working Willie and his Campaign Team led by Chief Sir Victor Umeh for the APGA Reelection LG Campaign Flag-off
It was a gathering of thousands of very happy party faithful and friends of the party who trooped out in their numbers to cheer the leader whose agricultural policies has turned the fortunes of farmers within their communities and across the State.
You can’t beat the mammoth with a variety of cultural groups… Ndi Ayamelum is 100% APGA.
Come November 18, Ndi Ayamelum will Vote APGA to keep Willie working!!!!
Still on the record breaking rally held at Anaku for the APGA LG Campaign Rally in Ayamelum.
Charles Ifeanyi Obi wrote…
The hardworking governor of Anambra state, Chief Willie MADUABUROCHUKWU Obiano (Akpokuedike Global) and the Victorious APGA Reelection Campaign Train ably led by the chairman, Chief Sir Victor Umeh OFR (Ohamadike Ndigbo) arrives Anaku, Ayamelum LGA for the ongoing LG campaign rally.
Among the notable personalities in the train are the Deputy Governor of Anambra state and his wife, Dr Nkem Okeke (Ugogbuzue), the National Chairman of APGA, Ozo Victor Ike Oye (Ozo Chikwadolu), the Member of the Federal House of Representatives representing Ayamelum and Oyi Federal Constituency, Hon Gabriel Onyenwife (Africa) members of the BoT of APGA, members of the state house of assembly, members of the state and national working committees of APGA, traditional rulers and the clergies, and the largest gathering of ndị Ayamelum ever seen in the council area…
The people lamented that the APC candidate was recently at their place with thugs firing live bullets and wrecking havoc in their communities… They vowed to resist every attempt by anyone to divide the vote of ndị Ayamelum as they have resolved to unanimously vote 100% for APGA and the reelection of Governor Willie Obiano on the 18th of November 2017.
It was indeed a home coming for the governor as he and his team was offered a grand reception by the people while the clergies and the traditional rulers prayed God to grant the wish of ndị Anambra which is that Governor Willie MADUABUROCHUKWU Obiano of APGA be reelected for second term.

Numerous social and cultural groups including masquerades were also present to thrill the honorary guests as well as the inauguration of over 2000 members of Independent Democratic party led by Mr O.J Udemezue (ID coordinator for Ayamelum).
#AnambraIsAPGA #ReElectObiano