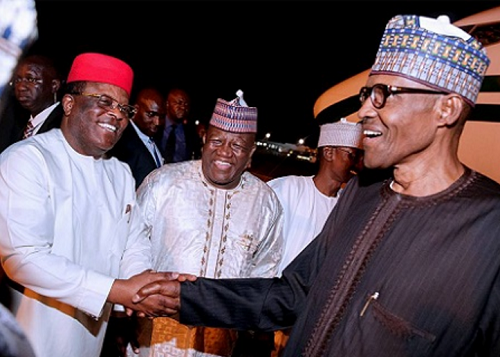 Governor Dave Umahi of Ebonyi State and chairman of the South East Governors Forum,  has said he backed President Muhammadu Buhari’s reelection in 2019 because the President is just having his first term in office
Elected on the ticket of the Peoples’ Democratic Party (PDP), Umahi had last  December denied speculations that he planned to dump his party.
His denial followed speculations  that he was making arrangements with his deputy to jointly defect to the All Progressives Congress (APC).
Umahi through his aide had described  the speculations as false, stressing that it was the figment of the imagination of those harbouring the rumour.

Umahi who was in the Villa ahead of President Buhari’s official visit to the state next week, was asked if Buhari had told him he was contesting the 2019 elections.
He relied: “Well, any first term governor would want to go for the second term and what you wish yourself, you should be  honest enough to wish another person the same. Since Mr. President is doing his first term and I am doing my first term, it’s my wish to re-contest and I will as  well wish the president the same to re-contest.”
Asked how prepared the state was to receive the president, the governor replied: “We are fully prepared for the visit. We pleaded with Mr. President for the visit and before then we have been preparing, we are fully prepared.”
According to him, Buhari will be commissioning a number of projects during his visit.

“We have quite a lot of projects that we have executed within this  past  two and the half  years. We have three twin flyovers that is built across the African tran-Sahara Road running from Enugu to Cameroon passing through  Ebonyi State, so we have to build  three twin flyover to decongest traffic on that  road, each of the twin flyover is 700-metre in length.
“We have completed two and the third one is 80 percent done, Mr. President will commission the two. We also have a mall; what we call Ebonyi Mall that is modelled after the famous Dubai Mall. And we intend for the president to lay a foundation stone of that mall, which we will like Mr. President to commission within the next 12 months.
“Also, we are building a tunnel that dovetails into a flyover that is parallel to the existing flyover, that particular junction that is called Akanu Ibim junction, we want Mr. President to lay the foundation stone and that flyover bridge will be named after Mr. President. We are sure to  finish that project in the next 12 months. Mr. President will be commissioning it when he comes back during his  campaigns. So, we will like to make them ready.
“There is also a federal road that is 14.5km that we got the consent of Mr. President to  build. We’ll toll the road when fully done. We have 18.5km leading to the federal university. We did that road with concrete and overlaid it with asphalt. We have 15.5km of Nigercem road that passes through the first cement factory in the country, which passes to Benue. We will build the 15.5 km in the axis of Ebonyi with concrete, ready for Mr. President to commission. A 23.5km of state road we built with concrete is also ready  for Mr President to commission.
“We have 500km of internal roads ready for Mr. President to commission. We have the stadium we remodelled, we have the best VIP stands in the whole country in our stadium which is fully airconditioned. The stands are fully covered.  We have a minimum of 30km of concrete road in each of our local government, most of them completed.
We have quite a lot for Mr. President to commission. We have mushrooms factory and agric project.  We have a launch of one-man-one-hectare programme we want Mr President to launch it for us.”
Follow Us on Twitter!