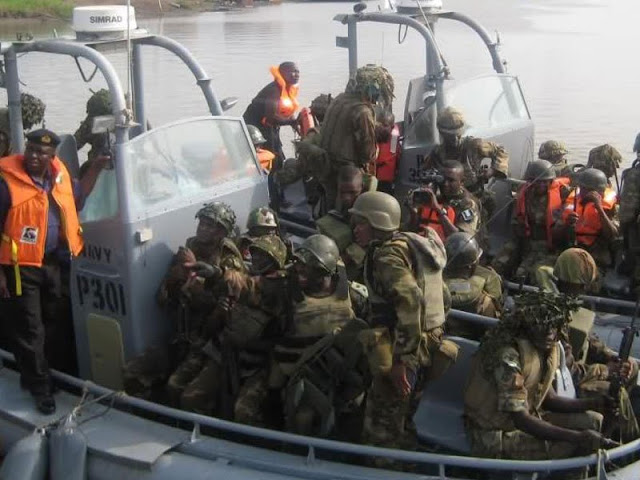 The mood was apprehensive around Gbaramatu Kingdom, Warri South-West council area of Delta state on Monday as residents and leaders sighted military aircrafts and gunboats around their communities.
The Nation reports that military aircrafts were seen hovering around the palace of the Gbaramatu paramount ruler in Oporoza, just as many gunboats were seen in different communities across the kingdom on Tuesday.
Meanwhile, military sources on Monday evening disclosed that there was no cause for alarm as the hardware seen were only meant for routine patrol of the Escravos and Trans-Forcados Pipeline and not any special operation targeting specific communities.
Speaking on the development, the spokesman of the Gbaramatu Council of Chiefs, Chief Godspower Gbenekama, expressed worry of what he described as fresh deployment of military equipment and personnel to Gbaramatu, a situation which he feared might negatively affect efforts currently being made to persuade the dreaded Niger Delta Avengers (NDA) to let down its guards.


“Some few hours ago, military aircraft was roving round our palace and there were troops with gunboats all over Gbaramatu Kingdom.

“While we are appealing to the Niger Delta Avengers to sheathe their sword, we don’t know the rationale behind, and why the deployment of troops and gunboats.
“Gbaramatu people are not at war with the Nigeria government, why is it that anytime there is crisis anywhere; something happens in Bayelsa, or Rivers state, the first place of call is Gbaramatu?
“We don’t want what happened in 2009 and 2016 to happen again. So let the military restrain itself and we are still appealing to the Avengers to sheathe their swords.
“The Avengers that were operating in 2016 that would say something, the next day they take drastic action are same people still operating but somehow they are now listening to us including the traditional ruler that they should sheathe their sword and give government sometime.
“And thank God nothing has happened since the renewed threat so why the deployment? Military presence in Gbaramatu and other parts of Niger Delta region is capable of escalating the crisis.
“Let the military back down. We are also appealing to agitators to sheathe their sword. While we still appealing to the agitators, the military should back down so that we can sustain the peace while the federal government embarks on one or two projects in the region.
However, explaining the development, the Commander of the Nigerian Navy Ship (NNS) Delta, Commodore Ibrahim Dewu, said what had been misconstrued to be a military assault was a routine patrol exercise in the area, saying the hardware seen were not deployed to harass any community or any person.
“What they are speculating as military deployment is routine patrol along Escravos and the Trans Forcados Pipeline. Once we sense any security concern on that line, our men usually move in to patrol the area. Nobody is deploying any gunboat or jets to specific communities. It is a normal patrol”, Dewu explained.
Follow Us on Twitter!