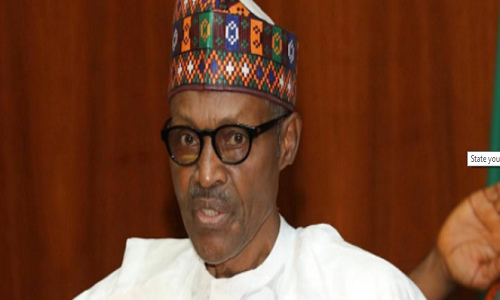 President Muhammadu Buhari
Olalekan Adetayo,   Ade Adesomoju,  Adelani Adepegba and Olaleye Aluko
Some Civil Society Organisations, as well as a former President of the Nigerian Bar Association, Mr. Olisa Agbakoba (SAN), on Wednesday asked President Muhammadu Buhari to state his role in the controversy surrounding the reinstatement  of the Chairman of the defunct Presidential Task Force on Pension Reforms, Mr. Abdulrasheed Maina.
They added that the revelations that followed the controversial reinstatement had dented the image of Buhari and called for a panel to investigate all issues surrounding Maina.
The former PTFPR boss had said Buhari asked the Attorney-General of the Federation and Minister of Justice, Mr. Abubakar Malami (SAN), to strike a deal with him (Maina).
Agbakoba, who spoke to one of our correspondents on the telephone, urged the President to break his silence on the issue.
The Senior Advocate of Nigeria said Maina had dented the President’s image by his claims, wondering why a “common” suspect like the fugitive “cannot be arrested by the Economic and Financial Crimes Commission unless somebody somewhere at the highest level of government is protecting him.”
He said, “Only the President can break this conundrum; otherwise, my personal belief is that right inside Aso Rock, there is some protection. If not, how can a man go in and out of Nigeria with the ease? How can Maina make allusion to the President asking him to meet with the AGF?
“In fact, what has happened is that the President’s image has been dented. Maina has dented the President’s image by alluding to the fact that the President had contact with him and instructed the AGF to make a deal with him.
“What I expect is for the President to immediately clear the air on what is going on.”
He said the claims by Maina had impugned the integrity of President Buhari’s anti-corruption war, adding that the President would be doing himself a favour by speaking on the issue.
He said, “The whole thing is a mess and it is difficult to know who to believe. It has, in my view, created the biggest dent in the President’s anti-corruption crusade because we have all the agencies quarrelling. We have the Attorney-General of the Federation quarrelling with the Head of Service, and so on.
“It sounds so ridiculously unbelievable and I think the President will be doing himself a big favour to break his silence, particularly as Maina said the President approved the meeting.”
The Centre for Anti-Corruption and Open Leadership, and the Socio-Economic Rights and Accountability Project, noted that Maina had more confessions to make.
They called on the President to inaugurate a panel of retired judges to investigate the allegations made by Maina.
The SERAP Director, Adetokunbo Mumumi, said based on the allegations by Maina, Buhari should set up an investigative committee that is not controlled by the presidency.
He said, “What Maina has said so far are allegations and counter-allegations. What should happen now is that an independent committee of enquiry consisting of retired judges must investigate the Maina scandal. The President must set up a committee of retired incorruptible judges.
“We don’t want anyone from the presidency or under the control of the President. It is not a question of investigation made up of people in the presidency, the senate and the House of Representatives.”

Also, the CACOL Director, Debo Adeniran, said, “Maina’s confession is not yet a revelation until it is proven. It could be his creative way of exoneration. The way forward is to let us have Maina speak up more. He threatened that he was going to name some names. If he does not give those names, he should be treated as an accomplice who is withholding information from the authorities.
“He claimed that he recovered so much money between the last administration and the present one. He should make public the details of the recovery so that we can see his credibility. The anti-graft agencies must probe Maina further to get the information at his disposal.”
Also a civil society group, Advocates for Peoples Rights and Justice, said Malami’s secret visit to the former boss of the task force on pension reforms in Dubai indicated that he and other officials were complicit.
The Coordinator of the group, Victor Giwa, noted that  Buhari might have been misinformed by his officials about the matter, adding that that probably explained why he ordered Maina’s sacking after he heard that the former pension reforms boss had been reinstated.
The activist demanded that Malami and the National Security Adviser, Maj. Gen. Mohammed Monguno, should clear the air on their reason for the Dubai visit.
“People like the NSA and Malami who visited Maina should clear the air on the position of the President. Also, they might have misrepresented the President and until Buhari speaks, we may never know the truth,” Giwa said.
The National Coordinator, Advocates for Good Governance, Macdonald Akhirome, said Nigerians would continue to hold the government accountable for its action on the issue.
He admonished Buhari to tell Nigerians the truth about Maina’s reinstatement, noting that his silence on the matter “speaks volumes about certain things that may not be understood at the moment.”
Akhirome said, “Our take is that the fact speaks for itself, it is glaring before the people, but one would expect that the government would take responsibility for its inaction and action.”
Maina, who is wanted by the  EFCC, in a video sent to Channels Television, claimed that the President gave  Malami  the nod to “go and sit down with Maina.”
The former pension reforms boss had claimed that he had not been taken to any court of law, noting that he had sued security agencies and had “four court judgments.”
Also, the Head of Service of the Federation, Mrs. Winifred Oyo-Ita, had said, in a leaked memo dated October 23, that Buhari was aware of the reinstatement of Maina, noting that she warned the President against it.
In the memo, Oyo-Ita had said her warning was based on the implications that such reinstatement would have on the anti-corruption war of the Federal Government.
‘Direct your enquiries to AGF’
When contacted, the Special Adviser to the President on Media and Publicity, Mr. Femi Adesina, said all enquiries relating to Maina should be directed to the Attorney-General of the Federation.
“Everything on Maina should be directed to the AGF,” Adesina said when one of our correspondents approached him for comment on the allegations made by the defunct PTFPR boss.
But the AGF neither answered our correspondent’s calls nor responded to a text message sent to his mobile phone.
Follow Us on Twitter!