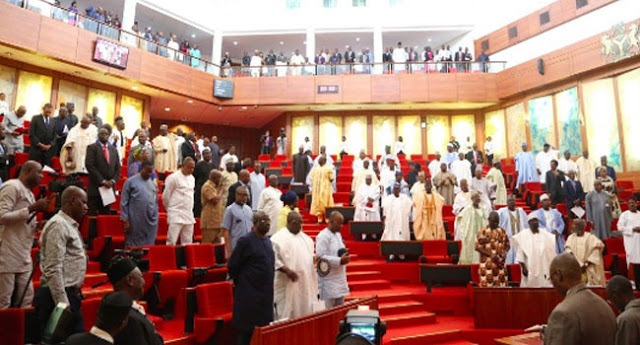 The Senate on Wednesday, called on the Ministry of Foreign Affairs to invite the Libyan Ambassador to Nigeria and discuss how to end the ongoing Libyan slave trade which allegedly involves the sale of Africans, some of them of Nigerian descent, as slaves. In a motion titled: "Urgent Need to Protect Nigerian Citizens from the Libya Slavery Auctions," which was sponsored by Senator Baba Kaka Bashir Garbai, the Senate called on President Muhammadu Buhari, to use the opportunity of the ongoing European Union and African Union (EU-AU) Summit in Abidjan to table the matter before the Libyan delegation. In his comments, President of the Senate, Dr. Abubakar Bukola Saraki, said: “As a country it is a slap in the face if Nigerians can be treated in this manner.

Other countries are taking necessary actions to bring back their citizens from that troubled country. We need to be doing similar things. The Ministry of Foreign Affairs must immediately summon the Libyan Ambassador here in Nigeria to explain what is happening, so that we can bring an end to this situation.” The Deputy Senate President, Ike Ekweremadu, speaking on the Motion, submitted that the Senate must urge Governments at all levels in Africa to take steps to ameliorate the economic hardship that is fueling the migration crises. Speaking on the motion, Senator Bassey Albert Akpan, said: “The time has come as a country to look into this issue. The Nigerian Ambassador to Libya must be invited to explain why this slavery auction has been going on unabated.” "It is high time that we resorted to citizen diplomacy in Nigeria,” said Senator Dino Melaye, contributing to the motion, “The Nigerian government must not only take the life of every Nigerian seriously, it must also defend its citizens wherever they are in the world."
Follow Us on Twitter!