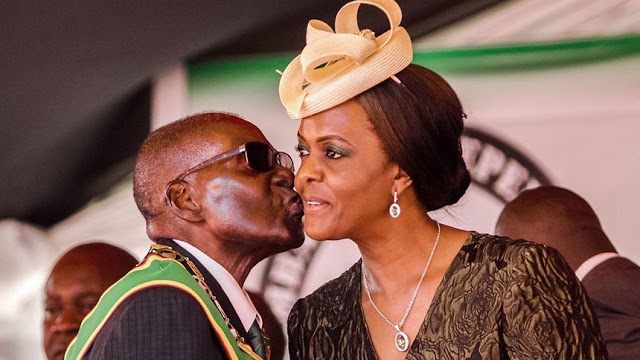 Robert Mugabe REFUSES to step down: Reviled dictator delivers rambling 20-minute speech after being sacked by his party and replaced by ‘The Crocodile’ but does NOT offer his resignation as President
*Zimbabwe President Robert Mugabe, 93, clung to power on Sunday night with a rambling speech in Harare
*The dictator vowed to hold a Zanu PF party conference in the coming weeks and said he would preside over it
*Mugabe, who was widely expected to stand down, vowed to fix party tensions and called for national unity
Veterans leader Chris Mutsvangwa said afterward that plans to impeach Mugabe will go ahead on Monday
*Zimbabwean President Robert Mugabe improbably clung to power on Sunday night during a rambling speech in the capital Harare.
Mugabe promised to resolve internal conflicts within his Zanu PF party and called for national unity and security, but gave absolutely no hint of his much-anticipated resignation.
Veterans leader Chris Mutsvangwa subsequently said plans for Mugabe’s impeachment will move ahead on Monday after he was given until midday to step down.

‘He won’t last the week,’ a senior Zanu-PF minister told MailOnline.
Speaking from the State House, his official residence, the dictator, who was wearing a dark suit and red tie, called for his nation to ‘move forward’.

The announcement, which MailOnline understands was recorded earlier today, attracted the highest viewing numbers for the national broadcaster, ZBC, since 1980 when the Zanu-PF won power.
The broadcast was delayed by technical difficulties and was preceded by a screening of Shakira’s Waka Waka (This Time For Africa) song, as well as hours of revolutionary and celebratory tunes on Zimbabwe’s national broadcaster, ZBC.
The lyrics of one of the songs said, ‘all of our problems have disappeared’ in Shona, the local language. Another said: ‘It was so difficult and so heavy, but because of you, God, we are here, we have conquered’.
Street celebrations, which began as news of the resignation broke, quickly broke down into a sense of despondency. The streets of Harare were deserted as Zimbabwe struggled to process the news.
There was almost no traffic on the streets and an eerie silence descended as people stayed indoors amid uncertainty about what may lie ahead.
One man, who asked not to be named, told MailOnline: ‘My dreams have all died. We are returning to a life of fear.’
Residents were concerned that the police, which had been withdrawn by the army, would return to the streets and start to enforce Mr Mugabe’s repressive controls once again.
The speech came after MailOnline revealed that the elderly dictator was in a state of psychological collapse, crying for his dead son and late first wife, refusing to speak or wash and staging a desperate hunger strike.
Ahead of his meeting with army officials to discuss his exit, Mugabe was ‘wailing profusely’ and saying that he wished he could speak to his dead wife, Sally Mugabe, and his late son, Michael Nhamodzenyika, who died from cerebral malaria in 1966 at the age of three.
Follow Us on Twitter!