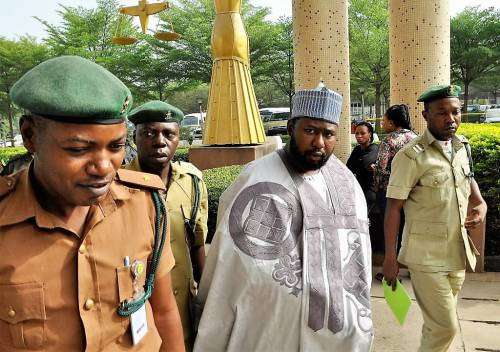 The prosecution in the case involving Shamsudeen, son of former Minister of the Federal Capital Territory (FCT), Mohammed Bala opened its case on Thursday with its witness disclosing how the defendant allegedly acquired N1.1billion property through phoney firms.
Led in evidence by the lead prosecuting lawyer, Ben Ikani, the first prosecution witness, Ishaya Dauda (an investigator with the Economic and Financial Crimes Commission (EFCC) gave details of how investigators unravelled the defendant’s hidden assets.
Dauda said the defendant allegedly paid a total of N1.1bn, with which he was said to have bought various properties in different parts of Abuja.
He said Shasudeen acquired the various houses in the names of different companies. He said investigators discovered the offences allegedly committed by Shamsudeen while investigating his father.
While the witness spoke, the ex-minister, Mohammed, who is also being tried before the High Court of the Federal Capital Territory, Gudu, Abuja sat in court on Thursday to witness proceedings in his son’s trial.
The ex-Minister is being tired on a six-count charge in which he was accused of receiving gratification and making false assets declaration of some of his properties.
In his evidence, Dauda told the court that besides the intelligence received on Mohammed, there was additional intelligence received about Shamsudeen’s activities, including how he (Shamsudeen) allegedly used the four companies to acquire the properties.
Dauda also told the court how the investigative team from the EFCC recovered N580,000 and $60,000 from Shamsudeen’s residence while executing a search warrant.
The witness said.”I know the defendant.In the course of investigating a case assigned to me against the former FCT Minister, Senator Bala Mohammed, we received additional intelligence concerning purchases of properties by the defendant.
“We received intelligence that the defendant acquired several properties within the FCT. We worked on the intelligence and we have names of the properties acquired through companies.
“The companies are Diakin Telecommunications Ltd, Balbac Minning Nigeria Ltd, Intertrans Logistics Global Nigeria Ltd.
“We extended our investigation to Corporate Affairs Commission. We confirmed that the companies were registered with the CAC.
“We invited the lawyers that registered these companies by name Ishiaku Shuaibu, who confirmed that he registered those companies.
“When we asked Shuaibu how he came about the companies, he informed us that one Abdulahi Sani, a staff with the Corporate Affairs Commission (CAC) gave him the name.
“Abdullahi Sani was invited to our office and was asked about the companies. He (Abdullahi Sani) also informed us that the defendant gave him the names of the companies to register.

“Our investigation was extended to Abuja Investments Development Company, where theGeneral Manager, Dr. Musa Musa, and the company secretary, Salisu Abdusalam, were invited to our office.
“Their statements were taken concerning the purchase of properties by the defendant using Diakin Telecommunications Ltd, Balbac Minning Nigeria Ltd, which they confirmed.
“They said he brought cash to their office. He bought to properties from Abuja Development Investments Company. The properties are located in Apo Area of Abuja
“Another property that was purchased by the defendant is at 7, Gana Street, Maitama, Abuja. He brought cash in company with a lady by name, Maimuna Aliyu Sanda.
“Together, they took this cash to the developer, by name, Farouk Saleh. The cash was in dollars, they told me. But the worth of the property was N210m.
“Another property was purchased at Sunrise Hill, Asokoro. The defendant made lodgment of N80m to the then Managing Director of the company. The MD, Sami Apougaoude, a Lebanese, now late.
“Then the defendant contacted a company, K &amp; K Construction Company, to build the said property.
“He again made a cash lodgment of N100m to Sunrise Hill in error which was then transferred to K &amp;K Construction Company into their Zenith Bank account.
“He then made a cash lodgment of N110m to K&amp; K directly. Again, he made a lodgment of N200m to K and K Construction Company.
“All these lodgments were made in the name of the company Birtrus Agro Allied Limited. The last time he made lodgment to K &amp; K Construction company was N296m,” the witness said.
Dauda said after the payments, in respect of which K&amp;K Construction Company issued receipts, Shamsudeen “transferred all his interests to a company, Intratrans Global Limited.”
The witness said the commission then executed a search warrant at Shamsudeen’s house at 1B, Embu Street, Wuse II, Abuja.
“We recovered the sum of N580,000,0000 and $60,000 (USD). Both sums are with exhibit keeper of the commission,” he said.
Dauda said the investigators later took Shamsudeen to EFCC’s office in Abuja, where he made statements and also completed the commission’s Asset Declaration Form.
Shamsudeen’s statements and the asset declaration form were tendered by the prosecution and were admitted by the court without objection from the defence lawyer, Chris Uche (SAN).
The prosecuting lawyer later objected to an application by Uche that the monies recovered from his client’s house should be returned to him because they did not form part of the charge against him.
Ikani said the monies were related to the case and promised to tender them through the EFCC’s Exhibit Keeper.
Trial judge, Justice Nnamdi Dingba adjourned to December 11 for the continuation of proceedings.
Shamsudeen and four companies on a 15-count charge bordering on money laundering and false declaration of assets to the tune of N1,105,719,005.
The companies being tried with the ex-minister’s son are Bird Trust Argo Limited, Intertrans Global Logistics Limited, Diakin Telecommunications Limited and Bal-Vac Mining Nigeria Limited.
Follow Us on Twitter!