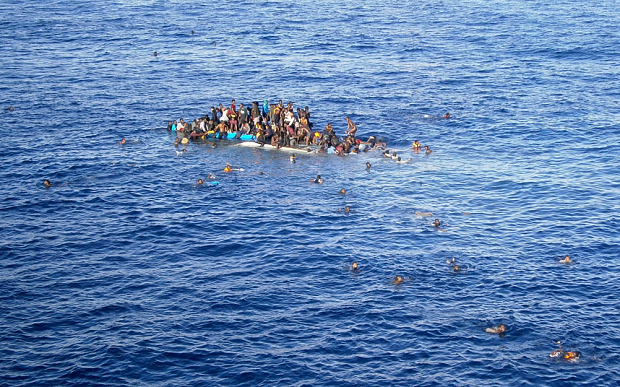 OPINION: Lewis Obi, a columnist with The Sun calls attention to the perilous journey to  Europe through the fiery Sahara Desert to the coast of North Africa across the Mediterranean on inflatable rubber boat otherwise known as the dinghy.
The Sahara Desert which served as a bulwark for fugitives fleeing from the Roman authorities, according to the writer is still the same for nothing has changed in terms of insecurity the reason why the Roman authorities often forget when criminal escaping justice run into to take refuge. This was where the 26 Nigerian young woman passed through on their perilous journey to the unknown.
He wrote:
''Nigerians will eventually know the whole story of what happened to the 26 young women whose bodies were recovered last week in a Spanish naval ship, with signs of sexual abuse.  They will get to know if they were just drowned during the shipwreck or victims of other kinds of mistreatment…  But the truth will be out with time.
The journey to Europe through the Sahara Desert has continued to be hazardous.  It is one of the ironies of modern history because given the numerous advances in communication since the 19th Century; such journeys should by now be considered routine, regular, and without the need for guides and contractors.
That Africans cannot freely travel in the continent in the 21st Century says so much for where we are.  In the 1970’s there was talk of an African Safari, car racing from East Africa through the Sahara Desert which was billed to be the toughest motoring race in the world.   All the grandiose talk and plans about a Trans-African highway from Cape (of Good Hope) to Cairo have remained nothing more than talk.  Indeed, to get from Lagos to Accra by road takes the whole day whereas with a true highway, it ought to be a four-hour journey.
The Sahara Desert was always too dangerous to cross and this dates back to the remotest periods of antiquity.  It was the Sahara which stood between Sub-Saharan Africa and the Roman Empire.  The Romans were terrified of it; they did not even dare to cross it.  Their African provinces or, more precisely, the territories they regarded as Africa then, were the strips of the Mediterranean coasts of Africa from Alexandria, through Tripoli, to Mauretania and Morocco.  Of course, they fought for a hundred years with Carthage, which is placed in the same location as today’s Tunisia.  Hannibal, the famous Carthaginian general, terrified them with his elephants, but the Romans eventually found a way round the elephants, Rome being, perhaps, the most innovative empire in the world for nearly 2,000 years.  But the empire had no answer to the Sahara Desert.

Indeed, when fugitives flee from the Romans and head towards the desert, Romans tend to give up.  Thus for thousands of years the Sahara was both a protection from invaders but also a great impediment to communication.  Sub-Sahara Africa gained its notoriety as the dark continent partly because the Sahara was impervious to adventurers and explorers of Greek or Latin origins.  It was left to the later adventurers during the middle ages to explore the so-called Trans-Saharan Trade routes which became important in the 8th Century andlasted till the 17th Century.
Even then, it was not an easy journey.  The traders went through a long period of preparation.  They had to go in caravans of 1,000 camels which were specially fattened for many months to be able to go through that tough journey.  The desert is a merciless terrain.  When it is hot, it burns the skin.  When it is cold, the wayfarers shiver.  Oases are few and far between.  It was  not a journey for the lily-livered.  The most optimistic estimate is 40 days for the desert-crossing.
The Portugese explorers who were not terrified by the oceans “discovered” Africa and rendered the Sahara Desertroutes unnecessary to European adventurers who eventually colonized Africa through the seas and began the inglorious Slave Trade through the Atlantic Ocean. Thus since the 17th Century, the proper route to Europe for Sub-Sahara Africans cannot be through the Sahara Desert and it is therefore to be expected that anyone attempting to go through the unusual route is likely to encounter unusual difficulties.

Nigerians who end up in Libya often go through Kano, or through the Chad Basin through Niger.  Libyan cities are just a hop from European countries, especially Italy.  From Libya, a migrant could look across the Mediterranean and imagine how close he is to his objective.  Yet the reality is that getting to Europe from Libya ‘in one piece,’ as it is said, is no mean task.  The European Union smarting under the refugee crisis provoked by the Syrian War was thrown into a political confusion which it seems desperate to control.  In doing so, it has gone to almost all lengths to ensure the crisis does not recur.  The Europeans have done deals with Turkey, including the grant of more than three billion Euros to ensure that its territory is not used as a transit camp for immigrants trying to come intoEurope.
The Europeans know the anarchic situation which has subsisted in Libya since 2011 following the Arab Springs which displaced the Kaddafi regime.  Although there are two competing governments in Libya, each with its own militia but without a centralized control, each locality in Libya is under a warlord, a strong man, who is almost always accountable only to himself.  This is one of the realities of the European adventure which most young Nigerians hardly take into account before embarking on their European adventure.
The Europeans have admitted that they have deals with those local war lords to prevent Africans from coming into Europe through Libya.  It is therefore not impossible that money is collected from many hapless Nigerians seeking to be transported to Europe by those same war lords who have also made deals to frustrate the immigrants.  The other plank of the European strategy is to slow down to a trickle or stop all manners of emigration to Europe from Sub-Saharan Africa by plugging every leakage.  There is a determination to grant no asylum status to Nigerians, for instance, because they see Nigerians more as economic refugees who are trying to escape poverty.
Direct European negotiations with sending countries have continued with a high-level EU delegation from the United Kingdom, France, Italy, Netherlands, Spain and other countries calling personally on the Senate President Dr. Olusola Saraki earlier this week at which the Senate President promised better legislations that would foster better economic conditions in the country as a way of discouraging illegal migration.

Some months ago, the Europeans were said to be contemplating a much bigger economic assistance to those countries whose citizens continue to knock at the gates of Europe, so as to help their citizens stay at home.  Seeing the special report by the CNN early this week concerning those Nigeriens and other Africans auctioned off in the so-called “slave market” in Libya for $400 each, young Nigerians would probably think twice.''