Policeman beat up Soldier at ATM queue in Damaturu 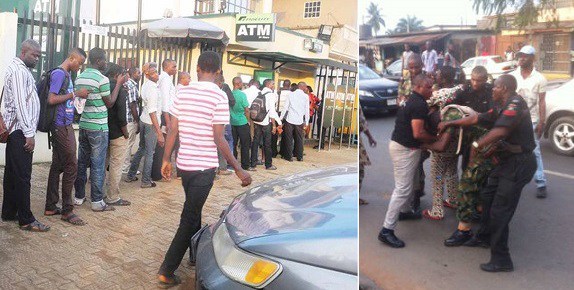 A police officer on Friday, wounded a soldier during a fight at the automated teller machine (ATM) at a bank in Damaturu, the Yobe State capital.

DAILY POST gathered that trouble ensued when the soldier, who was in uniform came to make withdrawal, but did not want to follow the queue.
When people began to protest, the police officer, who was in mufti confronted the Soldier demanding that, he must follow queue like any other person.
The two began exchanging words until combat followed with both displaying their tactics.
The policeman over powered the soldier and gave him the beating of his life until someone called the attention of both the military and police authorities in Damaturu.

The 2 i/c Mopol in Damaturu came and picked their man, including the police officers who were on duty at the bank for interrogation.
Another senior military officer, who arrived the scene also picked the wounded soldier back to base for treatment and possible interrogation.
It could be recall that few months ago, there was a similar clash between soldiers and policemen that left many casualties in the end.