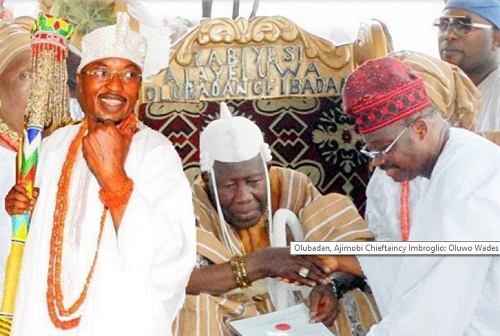 The Oluwo of Iwo in Oyo State, Oba Abdurasheed Akanbi, has said reconciliation is imminent between Governor Abiola Ajimobi and the Olubadan of Ibadan, Oba Saliu Adetunji over the chieftaincy imbroglio involving the newly crowned 22 obas in Ibadan
The governor and the frontline monarch have been at loggerheads over government’s review of the 1959 Olubadan Chieftaincy law.
The review resulted in the promotion of the members of the Olubadan-in-Council and 21 baales (village heads) to beaded crown-wearing obas (kings).

Oba Akanbi spoke in Ibadan, the state capital, after a meeting with Ajimobi.
The monarch said the Olubadan would soon align with the governor on the intents behind the Olubadan Declaration review.
The Oluwo had visited Oba Adetunji at his Popoyemoja palace on September 10.

The Olubadan, in a suit filed at the State High Court in Ibadan, sued Ajimobi, the Commissioner for Local Government and Chieftaincy Matters, the Attorney General and Commissioner of Justice and the 21 newly crowned obas over the amendment of the 1959 Olubadan Chieftaincy Declaration and subsequent coronation of the obas on August 27.
Speaking at Governor’s office after the meeting, Oba Akanbi said the progress on resolving the impasse showed Ajimobi’s commitment not to use his constitutional executive power on the matter.
The monarch also said his pronouncements that the Olubadan remained his father, coupled with the respect the two parties have shown each other indicated that the rift would soon be settled.
He added that Ajimobi had shown respect for the traditional institution, the desire for peace and progress of Ibadan with similar commitment to peace in his conversation with the Olubadan.
Oba Akanbi said: “I came to thank the governor for being peaceful, despite the impasse with the Olubadan. I have spoken with Baba, the Olubadan, previously, as well as last night. I have come to do same with the governor.
“This is because Iwo is the closest town to Ibadan, and the Oluwo is the closest first-class monarch to the Olubadan. So, what concerns Ibadan should concern Iwo. We have come to look for a way to resolve the issue. The governor has stayed with the peaceful side to resolve the issue. That is a good move.
“The governor respects the traditional institution a lot and he respects the Olubadan a lot. The governor has the law and executive order; he keeps referring to the Olubadan as his father.
“Definitely, the Olubadan will come to terms with the governor. We are working towards that. That is why I came here from Iwo, for peace. The governor has demonstrated that.”
Follow Us on Twitter!