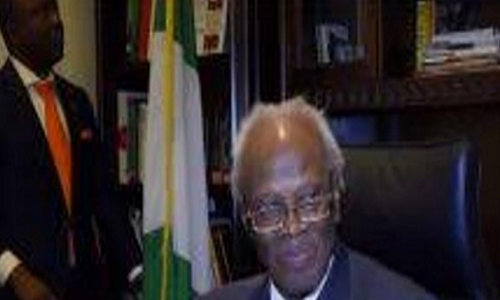 Nigerian Ambassador to the United States, Mr. Sylvanus Nsofor
The Nigerian Ambassador to the United States, Mr. Sylvanus Nsofor, has presented his Letter of Credence to President Donald Trump.
Nsofor, at the presentation of his credentials at the White House, applauded the existing cordial bilateral relations between Nigeria and the U.S.
The new envoy also expressed Nigeria’s desire to deepen its ties with the U.S.
Nsofor conveyed President Muhammadu Buhari’s goodwill and good wishes to Trump.
The envoy and his wife were thereafter honoured to a reception at the Nigerian Embassy in Washington, D.C.
The reception was attended by Amb. Hassan Mohammed, the Deputy Head of Mission, embassy officials and representatives of the Nigerian community in the U.S.
Mohammed described the new ambassador as a man of high standard and urged embassy officials to redouble their efforts to support him.
Nsofor was a Judge of the High Court, Justice of the Court of Appeal and Lecturer in Law at the Holborn College of Law in London‎.
He served as a judge/justice for 28 years with about 13 of his working career spent in the Court of Appeal.

82-year-old Nsofor retired as a Justice of the Court of Appeal in March 2005 after clocking the mandatory retirement age of 70.
Nsofor had on March 1 appeared before the Senate and refused to recite the National Anthem during questioning and his nomination was consequently rejected.
Buhari, however, resubmitted his name in April and the Senate reversed itself to confirm him.
Nigerian Senate on June 6 confirmed Justice Sylvanus Nsofor from Imo and two other nominees as Non-Career Ambassadors. The confirmation followed the presentation of the report of the Committee on Foreign Affairs on the screening of the nominees by the chairman of the committee, Sen. Monsurat Sunmonu.
She said that the Presidency resent Nsofor’s name for reconsideration.
“As opposed to being sarcastic and frail when he first appeared before us, he was looking better during his second appearance.
“Although the Directorate of State Security Services (DSS) maintained that Nsofor would not be able to perform due to his advanced age, it did not state any criminal record against him.
“We feel he should not be penalised based on age, the committee believes that since he performed better in his second appearance he should be confirmed.”
NAN
Follow Us on Twitter!