Home » news » Must Read: What the late former Vice President said about Nigeria before his death revealed

Must Read: What the late former Vice President said about Nigeria before his death revealed 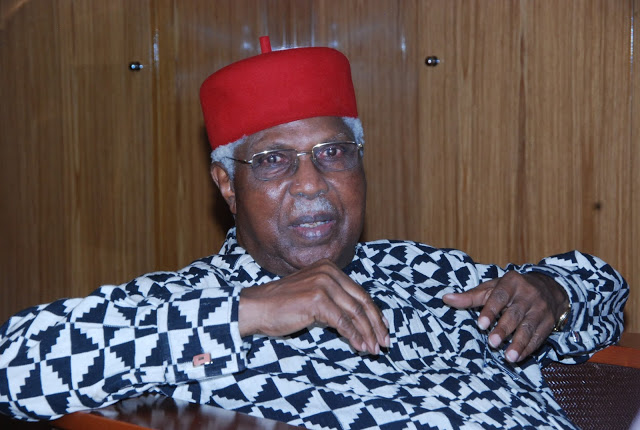 “So, I expected the party to send my name to INEC. Having said that and read the minutes of the NEC meeting, it was incontrovertible that a person who did not win his local government area, he didn’t win his ward, he didn’t even win the polling station in front of his house; so, with that PDP NEC decision, he couldn’t be the party’s candidate.
“And this decision was mentioned at the screening committee when we applied to contest. When the screening committee read the letter and its implications, Solomon Lar (may his soul rest in peace) wrote to them to plead that they should give Obasanjo provisional clearance to contest. That provision turned out to be solid but then I could have made a point that, out of six of us, who won our local governments, I had the highest votes among those qualified to contest and I expected the party to nominate me. The next day, the secretary, who had executive powers, could have sent my name and letter to INEC as party candidate while Solomon Lar would have sent Obasanjo’s name and letter to the same INEC. So there would have been confusion in the house of PDP.”
The former Vice President argued that it could have defeated “all the efforts we made and the risk we took to place our lives on the line during Abacha.  My own personal ambition was not worth putting Nigeria at risk and that was why I embraced Obasanjo and went on to campaign for him. A few days after, fund raising was done at the congress hall and I chaired that fund raising ceremony.”
In fact, Ekwueme played a pivotal role in the return of the country to civil rule after many years of military dictatorship. While Abacha’s junta was running riot, clamping people into detention and sending many to the great beyond, Ekwueme refused to be cowed. Particularly incensed by the disdain with which the junta treated civilians, Ekwueme mobilised patriots of like minds to try to find a way out of the cage, as it were.
He said: “When Abacha came, what really triggered me was his modus operandi. He came and it was clear that he didn’t have any regard for the civilian population. He thought everything was to be accomplished by force of arms. We organised first as civil society, nine of us, to try and really appreciate that, if we didn’t extricate ourselves from the military, we would remain slaves to them forever. Then from the Institute for Civil Society, we decided to hold a summit, which was held at Eko Hotel. While that was holding, he sent thugs to disperse us.  After that, we heard that he was planning to transit from a military to civilian head of state and we found that that was unconscionable. If he wanted to run as a civilian, he should retire from the Army and come into one of the parties and contest for nomination, not to use his position to manipulate political parties into nominating him as a sole candidate, that, in short, he would be returned unopposed. I guess all the decrees he passed said that no public servant should take part in partisan politics.
“So, after the summit, all of us in civil society met again and recognised the summit and felt it was widely assumed that they were all supporting Abacha because he was a northerner so we agreed that they would make the first move, telling Abacha that what he was doing was not acceptable.  So, we met at Kaduna and drafted a memorandum, which Solomon Lar delivered to him by a group of 18. Then after that, I called a full meeting at Glover Hotel in Yaba, where 34 of us met and I prepared a memorandum, which we gave to him, the G34 Memorandum.”
The G34 later metamorphosed into the PDP or, rather, it mid-wifed the PDP.
Ekwueme displayed uncommon vision and political sagacity during the 1994/1995 constitution conference when he championed the restructuring of the country into six geo-political zones. It was a political masterstroke aimed at giving every section of the country a sense of belonging. And it was one of the most important decisions reached at the conference. Another radical idea of his was that there should be one Nigerian Army with six command structures. Interestingly, he was out of the country when election into the conference was held but his people elected him in absentia.
According to the former Vice President, in advocating for six zones, he took cognisance of the skewed structure as well as the content and character of the polity.
His words: “We had three regions, the North, the East and the West.  The drawbacks of that structure was that the north was bigger than the other two regions put together, which meant that in a parliamentary system if all the other MPs vote together, they would always produce the Prime Minister, which meant that some parts of the country would consider themselves second class citizens if they could not aspire to the highest office in the land. That was the first pitfall. The second one was that we met the structure for each region such that in each region we had a majority ethnic group and then a group of minority ethnic groups.  In the North, Hausa/Fulani, then the others like Kanuri, Gwari, Nupe and so on coming down to others like Angas and Tarok.