Mob Beats Driver To Stupor, Burns Car After Hitting Woman And Her Baby In Delta. (Photos) 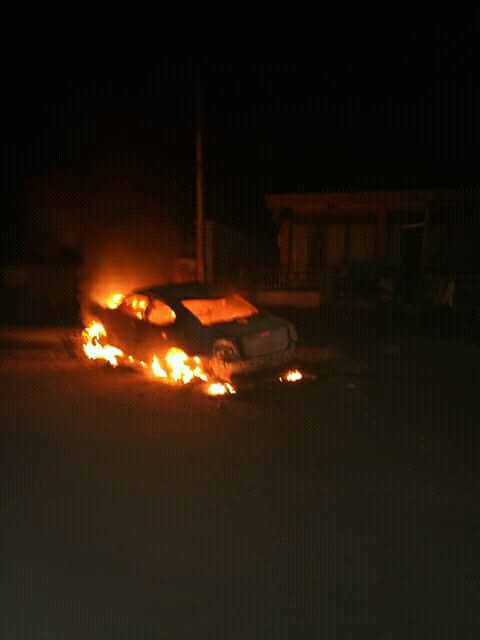 It was a black Sunday in Delta state after a driver wrecked havoc while coming from Warri at a high speed towards Warri/Sapele road Okirighwre market direction when he hit a woman with a baby boy wrapped on her back and a little girl who was about crossing from Benin Road axis to the opposite side.
The driver was said to have killed the little boy on the spot and left the mother and her daughter in critically state, the forehead of the little baby was opened with her skull showing.
The vehicle according to witnesses, allegedly hit the victims and continued in motion in high speed hitting the pedestrians path left and right until it ended up at the gate of Agofure Motor Park, where two of the girls who were in the car escaped for their live(s) and the driver was finally caught by angry mob.

The mob, furious with his actions, threw a “local lamp” into the car which started a fire, the driver was beaten to stupor, until he collapsed, but the mob woke him up, he was said to have offered the angry group of men who held him 500k by transfer, and one among of them was already falling for it until the elderly ones amongst them shunned the idea reminding them of innocent blood of the dead boy and the fate of the critically injured woman with her daughter who was currently on admission at the hospital..

So he was instead taken to the police station in a keke by same group of men.