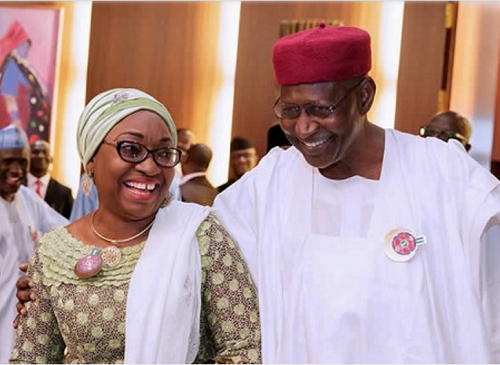 The Chief of Staff to the President, Abba Kyari; and the Head of the Civil Service of the Federation, Winnifred Oyo-Ita, on Wednesday embraced publicly before the commencement of the meeting of  Federal Executive Council at the Presidential Villa, Abuja.
The development came exactly a week after the two top government officials engaged in an altercation at the same venue.
Oyo-Ita, on arrival at the Council Chambers, venue of the meeting went straight to Vice-President Yemi Osinbajo and greeted him.
She was still discussing with Osinbajo when Kyari arrived.

All smiles, Kyari and Oyo-Ita embraced publicly as cameramen struggled to get good shots of the public display of affection.
Other members of the council clapped for them as the drama unfolded.
A heated argument took place between the two officials last week.

The altercation was believed to be based on Oyo-Ita’s leaked memo to Kyari on the controversial reinstatement and subsequent posting of the embattled former Chairman  of the Pension Reforms Commission,  Abdulrasheed Maina.
The mild drama played out in the presence of Vice-President Yemi Osinbajo; President of the Senate,  Bukola Saraki; Speaker of the House of Representatives, Yakubu Dogara, National Chairman of the All Progressives Congress, John Odigie-Oyegun; service chiefs and ministers.
Saraki, Dogara, Oyegun and the service chiefs were present to witness the inauguration of the new Secretary to the Government of the Federation, Boss Mustapha, as well as the inauguration of the 2018 Armed Forces Remembrance emblem.
Mustapha succeeded in calming frayed nerves after Osinbajo and Kyari were seen engaging the visibly angry Head of Service in a discussion.
The Deputy Chief of Staff, Ade Ipaye, also moved in and persuaded Oyo-Ita to return to her seat when it became obvious that all those in attendance were watching the drama with keen interest.
More Photo: 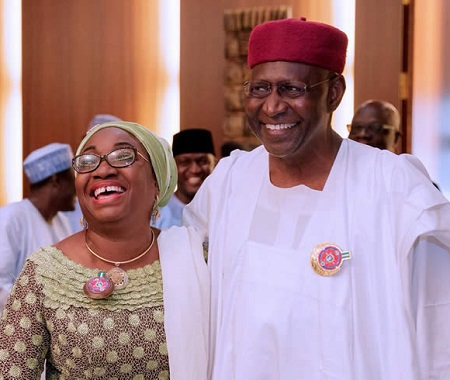