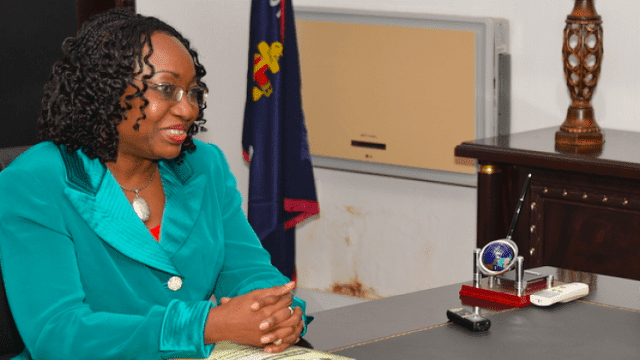 Winifred Oyo-Ita, head of service of the federation, says she warned President Muhammadu Buhari about the reinstatement of Abdulrasheed Maina, ex-chairman of the Pension Reform Task Team (PRTT), into the civil service.
Maina, who had been declared wanted by the Economic and Financial Crimes Commission (EFCC) over allegations of fraud, was reinstated into the civil service under controversial circumstances.
He was posted to the ministry of interior.
In a memo obtained by The Punch Newspaper, Oyo-Ita said she briefed the President on the matter on October 11, informing him of the “wide-ranging implications” of the move.
The memo was dated October 23, 2017, and addressed to Abba Kyari, chief of staff to the President.
Entitled ‘Re: Abdulrasheed Abdullahi Maina’, the memo was said to have been received by the office of Kyari on the same day.
“Please, note that the OHCSF was never in agreement with the reinstatement and consequently never conveyed the approval of the FCPC to Mr. A. A. Maina, nor approved his posting to the Ministry of Interior or any other MDA,” the memo read in part.
“Rather, I sought audience with His Excellency, Mr. President on Wednesday, 11th October, 2017 after the FEC meeting where I briefed His Excellency verbally on the wide-ranging implications of the reinstatement of Mr. A. A. Maina, especially the damaging impact on the anti-corruption stance of this administration.
“Further to your letter Ref. SH/COS/100/A/1570 dated 23rd October, 2017 on the above subject matter, I write to inform you of the circumstances leading to the irregular recall of Mr. Abdulrasheed Abdullahi Maina.

“I wrote to place on record the following facts as it permits to Mr. A. A. Maina who was dismissed from service on 21st February, 2013.
“The move to recall Mr. A. A. Maina was at the instance of a series of letters from the Attorney General of the Federation to the Federal Civil Service Commission requesting the commission to give consequential effect to the judgement that voided the warrant of arrest issued against Mr. A. A. Maina which formed the basis for the query and his eventual dismissal.
“The FCSC thereafter requested that the Head of the Civil Service of the Federation should advise the Permanent Secretary, Ministry of Interior to consider the AGF’s letter and make appropriate recommendations to the commission and this was so communicated to the Ministry of Interior.
“The Ministry of Interior took the matter to the Senior Staff Committee of the ministry and recommended the reinstatement of Mr. A. A. Maina into the service as Deputy Director.
“The OHCSF forwarded the recommendation to the FCSC which has the constitutional responsibility for appointments, promotion and discipline for further action.
“The FCSC in consideration of the letter from the AGF and the recommendations of the SSC of the Ministry of Interior consequently approved and conveyed the reinstatement of Mr. A. A. Maina with effect from 21st February, 2013.”
Following the controversy generated by Maina’s reinstatement, President Buhari on October 23 ordered his disengagement from the civil service.
Ibrahim Magu, EFCC chairman, on Monday said the people protecting Maina have made it difficult to arrest him.
To Receive News Alert On WhatsApp, Add 08027397554;For Adverts Enquiries, Whatsapp 08027397554,Send Articles & News Stories To editor@skytrendnews.com.