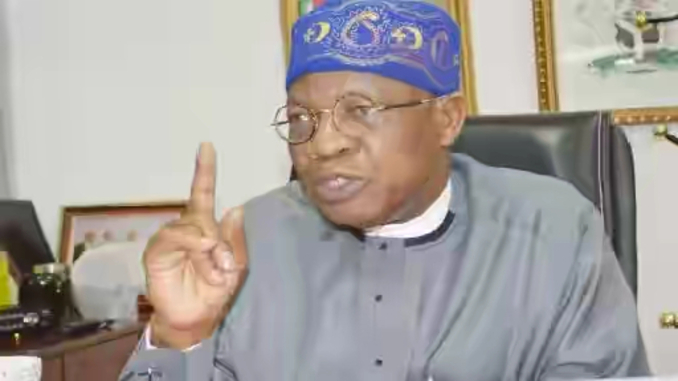 The minister of Information and Culture, Alhaji Lai Mohammed, has appealed to the media to fully support the current administration’s fight against corruption, saying the fourth estate of the realm cannot afford to sit on the fence as far as the battle to rid the nation of corruption is concerned.
Declaring open the 68th General Assembly of the Broadcasting Organizations of Nigeria (BON) in Abuja yesterday, the minister said while the media should not hesitate to criticise the government’s strategy for the war against corruption, when necessary, it should do so without mocking the government.
‘’In recent times, it is not unusual to read such headlines as ‘Buhari’s Government Losing Anti-Corruption War’, ‘Buhari’s Anti-Corruption War is Failing’, ‘Arewa Youths Knock President Buhari Over Failing Anti-corruption War’. This is sheer mockery. And this war is not Buhari’s war. It is our war,’’ he said.
On why all hands must be on deck to fight corruption, Alhaji Mohammed said corruption is the reason for the many ills being experienced in the country today, including erratic power supply, poorly-equipped hospitals, lack of motorable roads, poor quality of life, poor economy, lack of jobs and insecurity.
‘’After previous administrations spent billions of dollars on power, all we inherited – when we took over on the 29th of May 2015 – was 2,690 megawatts. That is due to corruption. After previous governments budgeted billions for roads over the years, what we inherited are death traps.
‘’That is due to corruption. Why did Boko Haram thrive for so long? The answer is corruption, because money meant for the purchase of weapons for the military were simply diverted. Why did we inherit an economy in dire straits? It is corruption. For a country that sold oil at over 100 dollars per barrel for years, we simply failed to save for the rainy day, and when the rain came, it beat us silly,’’ he said.
The minister said the war against corruption is the toughest of the three broad issues that the Buhari administration campaigned with, ‘’because fighting corruption anywhere is like walking a lonely road.’’
‘’While many will join hands with you to tackle insecurity or to revamp the economy, you are on your own when you take on corruption.
‘’Most Nigerians were direct beneficiaries of corruption. Many were subsidized by corruption. Now that the gravy train of corruption is fast derailing, many are finding it difficult to come to terms with it. That’s the origin of the ‘Bring Back Corruption’ Campaign being carried out by certain elements in our society,’’ he said.

Alhaji Mohammed said the war against corruption becomes tougher when the media is not fully on board, adding: ‘’When the media seizes on every setback we suffer in prosecuting this war, they give succour to the corrupt. When the media falls for the distraction tactics of those who are mortally afraid of this war, they weaken the battle.’’
In his speech the acting chairman, Economic and Financial Crimes Commission (EFCC) Mr Ibrahim Magu, disclosed that with the full support of the mass media the war against corruption in the country could be fully won in the next six month.
He described the media as a critical stakeholder in the fight against corruption in the country.
Magu called on the media to raise the alarm against any corrupt element and expose looters.
‘’The media has a very big role to play. I am very impressed with them. If the media can support us we will fully achieve our mandate. With the support of the media the nation will purge all corrupt elements in six months.
‘’As a media practitioner you are naturally a corruption crusader. I am calling on the media to support us. I am not accusing the media of being biased but I love criticism, corrupt criticism. It will aid us to achieve our mandate and sit tight.
‘’As a media practitioner you are naturally an anti-corruption crusader and whistle blower. I am using this medium to call on the media to expose all corrupt elements in the current administration,’’ he added.
Follow Us on Twitter!