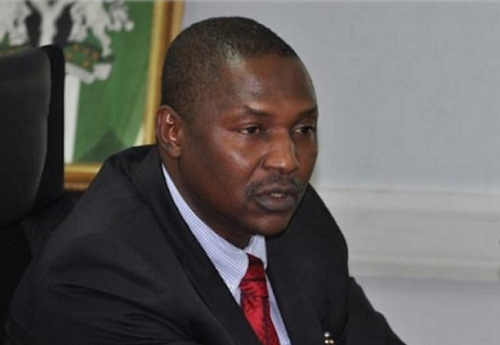 …Fight against corruption, promotion of human rights too
By Dansu Peter
The Honourable Attorney General of the Federation and Minister of Justice, Mr. Abubakar Malami, SAN has reiterated that the reform of the justice sector is a critical component of the overall agenda of the present administration to fight corruption, develop the economy, promote respect for human rights and due process and build public confidence in the justice system in the country.
Comrade Salihu Othman Isah, Special Adviser, Media and Publicity to the Honourable Attorney General of the Federation and Minister of Justice in a statement made available to newsmen on Tuesday revealed that Malami made this known in his opening address at a two-day National Sensitization Workshop on the National Policy on Justice for the South-South Geo-Political Zone on Monday in the ancient city of Benin City, Edo State.
He said the AGF who was represented by the Solicitor General of the Federation and Permanent Secretary, Federal Ministry of Justice, Mr. Dayo Apata disclosed that the Ministry has commenced the first series of the National Sensitization Workshop on the National Policy on Justice in the Geo-Political Zones of the country.
He explained that the efforts is in line with Federal Government’s initiatives at providing opportunities and platforms to strengthen collaboration, coordination and consensus-builders among justice sector institutions for effective service delivery and promoting the rule of law and socio-economic development.
The AGF surmised that in a federation and constitutional democracy, the need for the federal, states and other stakeholders in the justice sector to collaborate to drive the reform of justice system for national development cannot be over-emphasized.
“This workshop therefore underscores the determination of the Federal Ministry of Justice under our leadership to continue to mobilize justice sector institutions to put in place structures and policies to address the various challenges militating against the justice system in the country”, Malami disclosed.
He added that, “The participants, in the next two days are expected to critically examine the policy and initiate an implementation road map that will articulate into an implementation strategy plan.
“The strategy plan will thereafter serve as the framework upon which the policy is implemented, monitored and evaluated by all stakeholders”, the AGF concluded.
Speaking, the Executive Governor of Edo State, Mr. Godwin Nogheghase Obaseki called on the need for Nigeria to have a National Policy on Justice that would guide justice delivery in the country.

He added that the administration of justice in Nigeria urgently craves for serious reforms that can as well match its challenges, in accordance with international best practices.
Obaseki who also declared the workshop open, expressed the need to restore absolute confidence in the justice sector, just as he wished that the National Policy on Justice that was adopted at the summit held in Abuja on 10th August, 2017 would build a consensus among the key players and also address the challenges facing the justice delivery system in the country.
He hoped that the justice delivery system which had over the years been plagued with so many challenges would be rejuvenated, and all the key players of the justice sector sensitized so that all identified challenges be addressed, making for greater efficiency in the whole of the justice system, and enhanced justice delivery.
According to him, a lot of efforts have been put in place for an improved and efficient justice delivery in Edo State.
“The construction of Court Rooms and equipped with latest Computer system, appointment of more judges to enhance the justice delivery and the ongoing efforts towards prison decongestion by approving the release of seventy prisoners” are also part of the achievements by the state judiciary.
Earlier in his welcome address, the Solicitor General of the Federation and the Permanent Secretary, Federal Ministry of Justice, Mr. Dayo Apata represented by the Director, Public Prosecution of the Federation, Mohammed Umar Etsu explained the importance of the workshop particularly in that a National Policy on Justice with input from all stakeholders would be presented for consideration.
The SGF who was delighted by the programme, said, “We now have such policy in place and marked a paradigm shift. The policy sets out agreed principles and guidelines for effective and efficient service delivery.
The policy will provide the framework for resolving cross institutional problems, develop and manage an all-inclusive reform, as well as coordinate the implementation of reforms.”
He equally affirmed that, it will provide a blueprint which outlines the various reforms desirable in the justice sector to engender smooth, fair, just and transparent administration of justice in the country and also the needed professional guidance for all justice sector institutions in the discharge of their duties and the attainment of an effective and efficient administration of justice.
He said that the sensitization workshop would serve as a platform where the policy would be critically examined through the various presentations to be made and inputs harvested into an implementation strategy plan to be develop for the implementation of the policy. It is expected that Participants’ contributions would enrich the plan and ensure its smooth implementation when finalized.
The SGF expressed appreciation to Governor Obaseki for his support in organizing the workshop.
He also expressed gratitude to the HAGF for his leadership and unflinching commitment to the reform of the justice system, adding that the Federal Ministry of Justice under his leadership has continued to lead the process of galvanizing the justice sector to play its role in national development.
Finally, Akpata thanked all stakeholders and development partners for their support in the collective efforts at reforming the justice sector and for attending the workshop.
Participants at the workshop include judges, Solicitors General and Permanent Secretaries of Edo State Ministry of Justice, Solicitors General and Permanent Secretaries of various Ministries of Justice, members of the Nigeria Bar Association, Civil Society organizations, Nigeria Prisons  Service and top officials from the Federal Ministry of Justice among others.
Follow Us on Twitter!