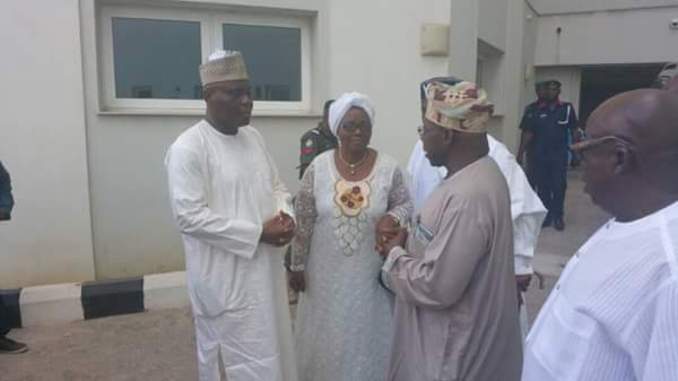 Nigeria’s former President, Chief Olusegun Obasanjo has declared that PDP need to be reformed and rejuvenated.
He made the remark at the Obasanjo Presidential Library in Abeokuta, the Ogun State Capital, when High Chief Raymond Dokpesi, the Chairmanship hopeful of the PDP paid him a visit.
High Chief Dokpesi in his opening speech formally informed the former President of his intention to run for the amiable position of National Chairman of PDP.

“I have come to seek your blessings Sir, as I embark on a journey of selfless service to serve my people in the capacity of National Chairman of the PDP. As a father of the party, you and some individuals worked tirelessly to see the party grow to become the best, not just in Nigeria, but Africa as a whole and for this, the party will continue to plead for your forgiveness”.
One of the Governorship Aspirants on the platform of the PDP in Delta state, Dr. Esther Udehi, who accompanied High Chief Dokpesi during the visit stated that Dokpesi is over qualified for the Job, that there is no other zealous, fearless, bold and more courageous for the job than High Chief Dokpesi. She also said that she wouldn’t endorse anyone who she was or is never sure of.

Responding, the former President, Chief Obasanjo declared that both the ruling Party (APC) and the opposition (PDP) should be rejuvenated and reformed, and shouldn’t be found wobbling the way they are doing at the moment.
He reminded his visitors that he is no longer in active Politics in Nigeria, and stated that he left the PDP when the party no longer stood for what it was formed originally.
“There was no reason why the PDP couldn’t have ruled Nigeria for 50 years, because we believed it would, we are aware that it has happened in countries like Germany and so on, but the party was destroyed by its very own People and can only grow if the builders of the party are much more than the destroyers”, he said.

The former President Further stated that the Supreme Court Judgement wasn’t enough victory, that what the party needs is a good Chairman.
“I had four chairmen under me, so I know what it takes to be a good Chairman and a bad Chairman”.
He prayed that the party gets the best person to lead and thanked Dokpesi for coming to see him.
Follow Us on Twitter!