Just In!! Mugabe Clears Deck For Wife Grace As Successor 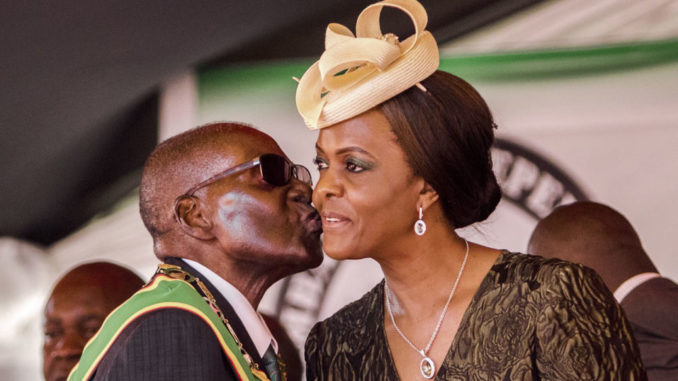 Zimbabwean President Robert Mugabe’s sacking of his deputy Emmerson Mnangagwa was part of a wider purge, to to neutralize any resistance to the political rise of his wife, Grace, analysts said.
Mugabe sacked his long-time ally Mnangagwa on Monday for showing “traits of disloyalty”, abruptly removing a favorite to succeed the 93-year-old leader and boosting the likelihood of Grace Mugabe becoming his next deputy and potential successor.
State television ZBC said the purge went beyond removing Mnangagwa, 75, as half of the ruling ZANU-PF’s national provincial executives separately met and passed resolutions expelling supporters of the former vice president on Monday.
ZANU-PF leaders in the eastern Manicaland region called for the expulsion of cyber security minister Patrick Chinamasa, a former finance minister before he was moved in a cabinet reshuffle on Oct. 9, ZBC said in an online report.
Chinamasa, fellow cabinet ministers Oppah Muchinguri, Chris Mushohwe and 36 other party members and officials were accused of being Mnangagwa allies who were disrespectful to Mugabe.

“The province recommended the expulsion of 39 individuals from the province who were involved with the Mnangagwa-aligned ‘Lacoste’ faction, which is accused of not respecting the party’s one center of power principle,” ZBC said.
The three cabinet ministers did not respond to calls for comment.
The process to weed out Mnangagwa allies was repeated in four other provinces, the state Herald newspaper said.

A senior ZANU-PF official from Matabeleland South Province told Reuters that the provincial executive there had on Tuesday passed a resolution to fire 15 senior members linked to Mnangagwa, including state security minister Kembo Mohadi.
Remaining provinces were holding separate meetings on Tuesday, two ZANU-PF sources in Harare told Reuters.
Recommendations by the provinces will be discussed by ZANU-PF’s supreme decision-making Politburo at its sitting next week and if adopted will seal the fate of the officials.
International Crisis Group’s southern Africa senior consultant Piers Pigou said purges of ZANU-PF members seen as supportive of Mnangagwa would neutralize any potential fight-back.
“Survival is going to be the name of the game for many people,” he said.
Five ZANU-PF provinces and the youth wing also recommended that Grace become vice president, ZBC said, opening the way for the first lady to serve next to her husband in government.
Grace has said ZANU-PF plans to change its charter this month to allow Mugabe to appoint a female vice president at a special congress set for mid-December.
Follow Us on Twitter!