Just In!! Martin Elechi, 6000 Others Join APC In Ebonyin State 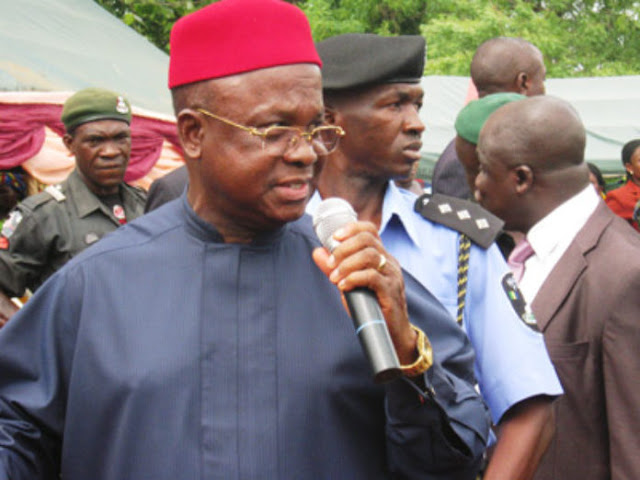 The All Progressives Congress National Chairman, Chief John Odigie-Oyegun, has received former Governor of Ebonyi, Chief Martin Elechi and his wife Mrs Josephine Elechi into the APC.
6,000 other former members of the People’s Democratic Party including former Deputy National Chairman of the Party, Chief Solomon Onwe joined Elechi in defecting to the APC.
Odigie-Oyegun while receiving them lauded their decision to leave their former party to join the APC, saying that the party was known for its adherence to internal democracy and discipline.
He said that APC was in control of 24 States out of the 36 States of the federation and expressed optimism that Anambra would be won by the APC after the November 18 gubernatorial elections.
He said that APC was set to take over the Ebonyi Government House in 2019 and expressed confidence in the ability of the party to wrestle power from the ruling PDP due to the quality and calibre of personalities in the party.
He described Elechi and Onwe as men with great political clout and sagacity, stressing that their entry into the APC would boost the chances of the party in 2019.
“They have not only come; they have not only joined but they have come with a retinue of quality supporters.
“It is my view that with the quality of men and women we are having that Ebonyi APC is finally ready to chase out the PDP from the Government House.
“You are now part of the APC family, we welcome all of you and together we shall match to victory come 2019,” Odigie-Oyegun said.
Elechi in his address said that he defected to the party alongside thousands of his supporters due to alleged injustices and lack of internal party democracy in his former party.
He applauded the National chairman of APC for upholding justice and internal party democracy in APC, pledging support and commitment of the defectors to ensure a landslide victory for APC in the 2019 general elections.

Elechi, who accused the Gov. Dave Umahi’s PDP led government of insensitivity to the plight of the ordinary Ebonyi citizens, said that APC government would right the wrongs and restore value to governance in the state.
He criticised the Umahi administration for its intolerance to credible opposition views, attack on press freedom, crippling the economy with needless loans and penchant for abandoning existing projects in preference for unrealizable elephant projects.

“The change we all clamour for is finally here with us; we are heralding the dawn of a new era in the Ebonyi body polity.
“The APC has come to salvage the decaying political values caused by the misgovernance of one man who has lost focus on what political leadership and governance entails.
“A man who prefers to embark on unrealizable elephant projects that have no direct bearing on the lives of the people.
“We built an international market with about 8,000 lock-up shops which is still not given out to the market men and women who need these shops and our Governor embarked on construction of shopping mall.
“The Governor abandoned Oferekpe gigantic water scheme and we hear that he is now embarking on construction of tunnel while our children are out of school due to the inability of parents to pay their school fees and pensioners being owed months of arrears, ” Elechi said.
He commended President Muhammadu Buhari for his administration’s fight against armed insurgency, corruption and driving the country out of economic recession.
In his address, the Minister for Science and Technology, Dr Ogbonnaya Onu, described the defection of Elechi and his supporters as historic.
Onu, while congratulating the defectors for their decision explained that the party members were happy to welcome them into the fold.
He said: “You deserve the best, the best is for you. We welcome you into the family where you rightly belonged.
“Nigeria is on a journey to greatness to assert her importance among the comity of nations.
“I urge all Nigerians and Ebonyi people to continue to support the administration of President Buhari.
“I commend you for choosing not only to identify with the change revolution but also to participate through your defection in causing the change to happen,” Onu said.
Earlier, the APC Acting chairman in the state, Mr Eze Nwachukwu, welcomed the party’s National Chairman and members of the National Working Committee (NWC), saying that the visit would strengthen the party ahead of 2019 elections.
He said that the State chapter had laid to rest the crisis that engulfed the party and was united as one indivisible family now.
He described the defection of Elechi and his supporters into APC as further confirmation that Ebonyi is an APC state, adding that the party had become more strengthened and repositioned.
Nwachukwu reaffirmed the support of the APC in Ebonyi to the second term reelection of Buhari, maintaining that members would throw their weight behind the project.
“We are happy to receive your Excellency, our indefatigable National chairman and your team to Ebonyi.
“The galaxy of people including the former Governor of the state you are receiving and welcoming into our great party is clear testimony that Ebonyi is APC and that we are ready to take over the Ebonyi sit of power.
“We support your leadership of our great party and are pledging our unalloyed loyalty to your leadership.
“We also reaffirm our support to the 2019 reelection of Mr President, the leader of our party and we appeal to him to present himself for reelection,” Nwachukwu said.
The defectors included Chief Edward Nkwoagu, Labour Party 2015 governorship candidate, some former Senators, former House of Representatives members, Commissioners, Special Assistants, Permanent Secretaries and local government chairmen who served under Elechi.