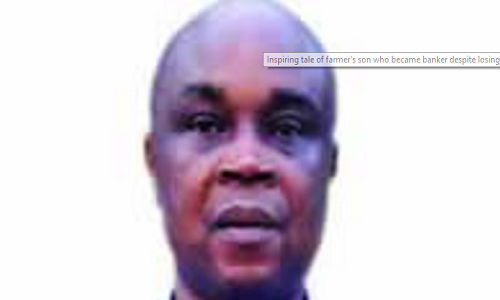 Eric Dumo
Except you know him closely, you could almost take a bet on the state of his eyes. Though wearing dark shade at times, his mastery of the environment and ease with which he moves around makes it quite tough for observers to spot anything strange. He talks and acts without leaving much room for suspicion. But beneath this strong posture that many see is a scar that David Okon has lived with for the most part of his 50-year sojourn on earth. Since losing his sight to measles at four, to waiting several years before getting an education, life has taken all manner of curves for the Akwa Ibom State native, constantly throwing challenges on his path.
Born to a peasant farmer, who had many children from different women living under his roof in their rural community, Okon had his dream of becoming big in life killed before it had even hatched. Like most kids in the area, he had dreamt of becoming very successful in life and pulling his family out of poverty. Even though there was little contact between them and the outside world as a result of lack of electricity and other modern technology in their rural community, the young boy was bubbling with life and lots of promises. Nothing could stop him. But sadly, one morning, everything changed.
“I woke up one morning feeling serious pains in my eyes,” he recalled during a chat with our correspondent. “Even though I was about four at the time, I remember feeling as if my eyes were on fire. My parents and everybody in the family were confused. There had never been such in the family. My parents took me to different places and tried all they could to save my sight but by the time it was realised that it was measles, it had become too late. It had affected my eyes beyond redemption,” he said.
That incident marked the beginning of a new and tortuous journey for young Okon – a voyage where there are no days or nights – only constant darkness. Apart from not being able to move around freely like other kids his age, he could not also do the things that he desired at that point. A few years later when the others started primary education, he found himself on a completely different path. Weeping and lamenting characterised his entire days.
“I would spend hours crying in the house because I couldn’t attend school like my mates as a result of the loss of my sight,” he revealed. “Even though my parents enrolled me at the school, the teachers there after some time advised that I should stop coming because it was no use if I couldn’t see what they were teaching me. As a result of my impairment, the other children would make jest of me in class resulting in fight between them and me all the time. Eventually, when I was withdrawn from the school, I felt like my life had ended,” he added.
The coming months and years weren’t completely pleasant for Okon. Besides being at the mercy of children in the community, who would harass and subject him to ridicule as a result of the loss of his sight, nobody around gave him a chance to succeed. He became almost the reference point for everything negative in the area. But one day in 1975, things took a different turn. He looks back today with a grateful heart.
“A church came to do a programme in my village that year and my mother happened to be one of those serving and attending to them. I had to go visit her on one of those evenings and in the process, one of the visitors from the United Kingdom saw me, made enquiry and was told that I was the child of one of the women taking care of them.
“Thereafter she told my parents about a school in Lagos where blind people are taught and become important people in the society. It sounded strange to many people in the village who had wondered how a blind person could become a lawyer or doctor.
“Two weeks after that time, a letter came, asking me to resume at the school. My father who had never been to Lagos embarked on the journey with me. We arrived in Lagos after spending three days on the road from our village,” he said.
Fully enrolled at the Pacelli School for the Blind and Partially Sighted in Surulere, Okon was set for a new phase in the journey of life. Even though the institution had all the facilities to aid his disability and help him settle in very well, there was still a problem.
“As a result of where I was coming from, I couldn’t speak English like the other kids and so could not communicate with anyone on arriving at Pacelli,” he told our correspondent before bursting into laughter. “There were no people speaking my language there, it was tough for me. To make matters worse, I was used to eating fufu back in the village and here we were talking about amala and others, it was quite strange. It was a whole new environment, so it took a while for me to adapt to the situation.

“I would cry all the time and as a result, my father had to stay back in Lagos, coming to check me from time to time. It got to an extent that the school authorities had to ban him from coming close to the school.
“With time, I managed to get along. I had to learn fast because nobody could communicate with me. From Pacelli, I went to Kings College, Lagos, for my secondary school. It wasn’t easy initially but because at Pacelli, we had been trained on how to cope in the outside world and also taught to type and do our own notes in Braille, I got by quite well,” he said.
While many would have stopped at that point especially considering their family’s poor background, the 50-year-old had other ideas. He wanted more in life. Even though he was visually limited, his dreams were limitless.
“I got to the University of Lagos to study Political Science by the cheer grace of God,” Okon said with a voice filled with gratitude. “My father had many children and didn’t earn much from his farm, sending me to the university would have been a very big deal for him. But somehow, someway, I managed to find myself there.
“I went through university education through the help of some kind-hearted individuals like late Prof. Abiola Ojo. He really helped me a lot in achieving my educational dreams.
“The university environment was a completely new setting, different from the two previous schools that I had been. While some lecturers had pity on my condition and made life easy for me in some cases, others simply didn’t care, preferring to add to my worries. In fact, as a blind student, you were constantly at the mercy of both lecturers and fellow students,” he said.
Having witnessed suffering at different periods of his life, Okon had looked forward to a new and exciting experience upon graduation. A graduate of political science, ending up in one of the big offices that dotted the city centre of Lagos was his ultimate goal even though he had physical limitations. Like most people in his shoes, he threw his resume everywhere, applying for any available job in his quest to get off the labour market. But the more he tried, the more he realised that things were not how he had thought.
“By the time I graduated, I didn’t think I should bother people who had helped me so much with requests for jobs, so I started looking for a job on my own.
“A lot of times, I was denied entry into interview centres because I had no sight. Right from the gate, you’d begin to feel the heat and get the message that you were not needed there even if you had all the qualities they were looking for. On a few occasions where I was invited for interviews, I would be turned down immediately I showed up and they realised that I had no sight. They’d promise to get back to me but of course, that was always the last time I heard from such,” he said.
After toiling so hard without success, luck finally smiled on Okon one day when after attending an interview with an old generation bank, he was given a job. More than 24 years after that period, he has continued to thrive at his duty post even though he had faced emotional and psychological abuse on a number of occasions as a result of the loss of his sight. Revealing how demoralising the experience had been at times, the Akwa Ibom State native told Saturday PUNCH that he had learnt to surmount every hurdle life had placed on his path with dedication and commitment to duty.
“Even though I have remained with the bank for more than 24 years, there are times when people want to deliberately make you feel bad because of your predicament.
“One of my bosses actually told me that his department wasn’t a dumping ground for blind people when I was to be posted to him at a certain period. As a result of that, he ensured that life was very tough for me under him. He is no longer in the system today. I thank God for showing the world that I am not as useless as many of them think.
“There are so many people that I should have been far ahead of in the system today but who are above me because I am visually impaired. I do not feel bad about this but only thank God for how far He has brought me. That is how life is.
“I have seen people whom I grew up with go far ahead of me in life. I have also seen others who are far below me despite not being blind. So, I have cause to thank God for my life and how He has helped me motivate other blind people and persons living with disabilities. Even though I am visually impaired and may not have got to where I would have wanted in life, I am grateful to God because I am doing a lot better than many who even have sight. As the son of a village farmer, nobody gave me a chance to make it in life especially with my visual impairment. But I thank God because today, my life is a testimony to many people all across Nigeria,” he said.
Apart from boasting a Master’s Degree in Public Administration from the University of Lagos on top of several professional qualifications, Okon has gained recognition for his efforts in championing the cause of visually impaired people across Nigeria. He told Saturday PUNCH that the thought of his loving wife of 15 years and three wonderful children is among the things that renew his resolve to forge ahead strongly in life.