Home » news » Ikoyi Whistle-Blower Fires Back At EFCC – Pay Me My N850m Reward, I Am Not Mad As Magu Your Boss Claim

Ikoyi Whistle-Blower Fires Back At EFCC – Pay Me My N850m Reward, I Am Not Mad As Magu Your Boss Claim 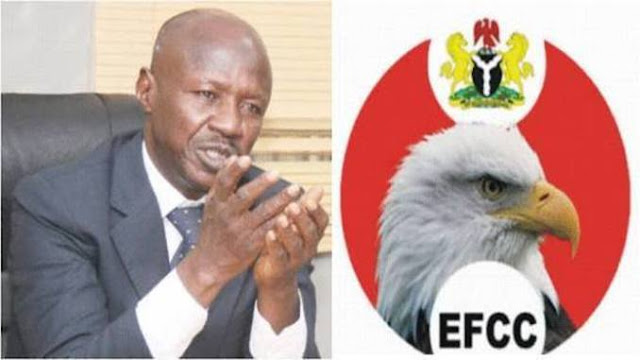 He has been Taken to Yaba Psychiatric hospital without been paid his N850m reward —Lawyer
JUST like the drama and surprises that trailed the discovery of $43.5 million, £27,800 and N23.2 million at No. 16 Osborne Road, in Lagos, the matter has taken another dramatic dimension with the whistle-blower dismissing the claims by the Economic and Financial Crimes Commission, EFCC, that he had gone mad
He, however, said he was only disturbed by the failure of the anti-graft agency to pay him the reward for exposing the loot in accordance with the whistle-blowing policy of the Federal Government.
Saturday Vanguard recalls that the government had in 2016 approved a policy on whistle-blowing that aimed at encouraging Nigerians to report financial crimes.
The Minister of Finance, Kemi Adeosun, who announced the policy, said anyone, who provided information leading to the recovery of fund would be entitled to not more than five per cent of the recovered sum.
However, the revelations about the Ikoyi whistle-blower which were made by his lawyer, Mr. Yakubu Galadima in a chat with Premium Times, yesterday, were contrary to claims by the Chairman of EFCC, Mr. Ibrahim Magu that the person had been paid.
Shouting that he needed his money
Magun had at the 7th session of the Conference of State Parties to the United Nations Convention against Corruption, said the whistle-blower had become a millionaire.
He said: “We are currently working on the young man because this is just a man who has not seen one million Naira of his own before. So he is under counselling on how to make use of the money and also the security implication. We don’t want anything bad to happen to him after taking delivery of his entitlement. He is a national pride.’’
While puncturing the claims that the whistle-blower had become a millionaire, Galadima said his client had been subjected to unfair treatment despite heeding the call to expose looters.
He said the inability of the commission to pay his client the reward after the forfeiture of the money made him to start shouting that he needed his money at the Department of State Security Service, DSS, apartment where he was kept.
At that point, the lawyer said his client was accused of being insane, resulting in his relocation to EFCC office from where he was taken to Yaba Psychiatric Hospital.
They said he is mad
His words: “The day we went to the office of the then Acting President, they gave him a number that he could reach at any time. So he has been communicating with the Vice- President. Following the threats, they detailed some SSS to be working around him. “Because the guy had always been looking forward to seeing this money and it wasn’t forthcoming, he started shouting. When he started shouting, they said he was mad, that he is having a mental problem.

“The SSS people called me and said I should come and carry my luggage. They brought him to the EFCC and abandoned him there. The EFCC people called me that I should come and carry my client.
‘’On getting to the commission’s office, I was informed of my client’s mental illness and plans to take him to the Federal Neuro-Psychiatric Hospital in Yaba.
“I said he is not mad, that it is because you people are holding his money that is why he is reacting this way. They insisted that the guy was mad, that they had to take him to a psychiatric hospital. They bundled this man. I said ok if that is how to prove that he is not mad, no problem. We went to the psychiatric hospital in Yaba
.
“They injected him and said they have to monitor him for a month. They monitored him for a month. The day they were going to release him, the EFCC called me again to come and carry my “critical asset.
‘’ This was a boy I never knew from Adam. I said ok, I went to the EFCC, the guy said he was ok, there was no problem anymore. They handed him over to me three weeks ago. I pay money into his account on a weekly basis for his upkeep.’’
A letter to the President Galadima further disclosed that he had written a letter to the President demanding that the boy be paid his money.
The letter which was said to have been written on October 12, 2017, partly reads: ‘’While you were away receiving treatment I wrote twice to the Acting President through the office of the Acting Chairman of the EFCC on 7th June 2017 and 24th July 2017 respectively.
Because the money discovered was about N17 billion and not N13 billion that is being declared. It was calculated as at the time the money was recovered.” He, however, dismissed reports that his client would receive N350 million reward, saying that the actual figure was N850 million.
An effort by Saturday Vanguard to get the reaction of the Spokesperson of the EFCC, Mr. Wilson Uwajuren was not fruitful as he did not pick his calls.
However, Uwujaren, in a statement yesterday said Magu never said the whistleblower had been paid his compensation.
Follow Us on Twitter!