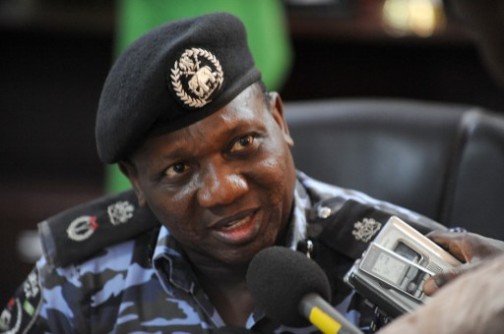 The security details of Governor Willie Obiano which was on Tuesday withdrawn by the police have been restored following the intervention of the Presidency.
The Inspector General of Police had in Tuesday announced the withdrawal of the Governor’s Aide-de–camp (ADC) and Chief Security Officer (CSO), saying that it was based on past experience where the security officers worked for politicians that they were attached to, saying that he won’t want it to happen in the state governorship election.
The National Chairman of All Progressive Grand Alliance (APGA), Chief Victor Oye ,who confirmed restoration of the governor’s security aides in a press briefing yesterday, commended President Muhammadu Buhari for his intervention and for not undermining the office of the governor.
He also charged him to ensure a free, fair and credible election on Saturday’s governorship election.
He said that as the chief security security officer of the state, the governor’s security was not supposed to be tampered with at the first instance, saying that under the law, Obiano still remains the governor until March 2018 when his first tenure would expire.

Oye also alleged plot to rig election despite the assurance by the INEC to conduct free and fair election, stressing that rigging the election would create crisis and anarchy in the state, but promised that the party will resist any attempt to rig.
He alleged that the influx of some elements  in the state was a rigging strategy and called on  security agents to be alert and ensure that democratic process was being protected.
He described the defection of the son of the late Dim Chukwuemeka Odumegwu Ojukwu, Emeka Jnr, to APC as inconsequential to the re-election of Obiano, saying “he is a prodigal son for now”.

Oye said that Ojukwu Jnr has the right to belong to any party he desires but noted that he would still come back to his root where his father and himself started which is APGA.
Ohanaeze warns IPOB, approaches INEC for observer status
From Chidi Nnadi, Enugu
Ohanaeze Ndigbo yesterday said that the Saturday’s  election must be free and fair and warned those who have the intention to rig and troublemakers to steer clear.
The President General of Ohanaze, Chief Nnia Nwodo, who handed down this warning yesterday in Enugu, said  that the proscribed Indigenous People of Biafra (IPOB) calling for a boycott of the election do not have the interest of the people of the state at heart.
“It is not in the interest of Anambra people for you to tell them not to go and vote because if they do not vote, there will be anarchy because the constitution does not conceive any other thing to do than a state of emergency. It is criminal for anyone to say don’t come out to vote, if you come out to vote you will die; that is incitement, attempt to murder and when security operatives come against them, they will say its Operation Python Dance. Any attempt to rig, manipulate, falsify or impose results will be seriously resisted,” he said.
Nwodo disclosed that Ohanaeze has applied to the Independent National Electoral Commission (INEC) to be given an observer status for the election, saying that they have already recruited lecturers from universities and polytechnics to help them in the exercise.

He also said, “ Ohanaeze has not endorsed any of the candidates. All we want is a free and fair election and for votes to count.” (THE SUN)