How Our General Overseer DUPED Us - Church members cry out 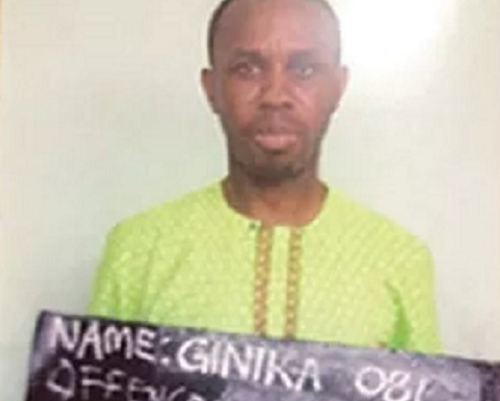 Victims of an alleged Ponzi scheme operated by the General Overseer of City of Liberation and Comfort International Ministry, aka Seed of Life Ministries in Enugu State, Bishop Ginika Obi, have revealed the disturbing experiences they went through in the hands of the cleric.
Obi also runs a financial money deposit scheme known as Building Your Generation Organisation (BGO) Foundation.
Investigations revealed that the church was set up primarily to gather membership to feed the financial scheme as the church members were initially recruited to, not only make personal deposits, but also serve as canvassers, to bring in other investors.

The investors, who had since came to their senses, are now clamouring for refund of their initial deposits.
The victims said they deposited different sums of money ranging from N200, 000 to N3million in the scheme with hope of receiving double of such amounts within weeks.
They would later realise they had been conned as Obi, allegedly refused to double the money and also refused to return their initial deposits.
Rather than return their money, Obi regaled them with bizarre tales of how the money, which he usually pays investors, comes directly from heaven. He further told them that he wouldn’t be able to pay them because the Holy Spirit has instructed him to stop paying.
One of the victims said: “In fact, he demanded that we should deposit more money, if we wanted him to pay us. This was before the bubble burst and police got him arrested.”
The police hierarchy said it was determined to get justice for those duped. The Enugu State Police Public Relations Officer (PPRO), a Superintendent of Police (SP), Ebere Amaraizu, said that Obi would be charged for Conspiracy and Advance Fee Fraud.
Amaraizu said: “The Bishop, with others at large, defrauded some victims of several millions of naira. He collected their money and promised them that they would reap bumper financial dividends in return (Ponzi scheme). He tricked them to pay various sums of money to his church/office, located at Kilometer 111 Enugu/Port- Harcourt Expressway, Enugu South Local Government Area of Enugu State.”
The PPRO said that Obi’s arrest came after investigations carried out by operatives of the Enugu State Commissioner of Police Monitoring Unit, anchored on several petitions against Obi and his partners.
According to Amaraizu, when Obi and his partners realised the game was up and that the police were onto them, they went underground.
After weeks of hunting for the fleeing conmen, one of them, Obi, was finally located at a hotel, around Amechi road axis of the state.
The news of Obi’s arrest travelled like a wildfire, leading to hundreds of victims besieging the Enugu State Police Command. He was charged to court and remanded in prison custody, from where he would be going for trial.
When he was first arraigned before Justice A. Liman of the Federal High Court, he was granted bail, but had to be remanded in prison custody, after he couldn’t meet his bail conditions. At that arraignment, an 82 count-charge was brought against Obi and he pleaded not guilty.
The bail conditions stipulated that Obi should get two sureties; a Director in Government Ministry and a traditional ruler from his community, and a sum of N50 million bonds in case he jumps bail. He was remanded on October 12, 2017, to enable further hearing of his case, which has been adjourned to November 1st and 2nd 2017 respectively. On November first and second, many witnesses appeared to testify on how Obi allegedly swindled them.

One of the victims, who simply identified himself as Aneke, a 300Level student, Science and Computer Education, Enugu State University of Science and Technology (ESUT), said that like most of the victims, he is a member of Obi’s church.
He said: “One day, Bishop announced that there was a business he would introduce to us. He explained that if we deposited N7, 500, we would be paid N20, 000 at the end
of three weeks. He said those that deposited N18, 000, would receive N30, 000, and so on. He started demonstrating it by paying initial depositors. I joined
later, and even invested other students’ money; some of them are students of ESUT and Institute of Management and Technology (IMT). I was the contact person because I worship in the church. Many of them sent money through me for the scheme.
“We paid the money in November 2016; we had hoped that Bishop would pay by December. When it was December time, he failed to pay. He promised January and by then, examination was fast approaching; the money was our school fees. I stopped going to school; it was dangerous for me to keep going to school because of the students. Many of them were planning bad things against me. It affected my studies.
“Bishop was still in church then. He started dribbling me; asking me to come today, come tomorrow. Most days, I would go to his place and be there until nightfall. At a time, he said that banks refused to pay him. But even in this situation, he kept asking us to bring more money that he would pay us.
One of the victims, a girl, gave me N108, 000, which I gave to Bishop. After a while, Bishop went underground. We couldn’t find him. Whenever we got him on phone, he would make promises, but didn’t fulfill them. This is the first investment of some of the students that paid through me. Till date, these students have not paid their school fees.”
Another depositor, Nnaemeka, a fashion designer, recounted his experience.
He said: “I invited my in-laws, my mother, sisters and other people into the scheme. I deposited N1.4 million. Bishop promised to pay in three weeks. But at the due time, he said Holy Spirit told him to stop paying. My mum had a burial, she needed money. It was the reason she came to meet Bishop.
She needed assistance. He asked her how much she had. She said N200, 000. He told her invest the money, that she would get N500, 000. I have since become enemy of those I invited to join the scheme.
“Bishop told us that the money he pays to investors comes from heaven. When he stopped payment, people asked why, he said Holy Spirit asked him to stop. During Christmas period, he asked people to go and bring school fees, house rent and other money.
He said they should not keep money in banks. He said that through the power of the Holy Spirit, the money would be doubled. After Christmas, when school resumed in January, he disappeared.”
Chinelo, who said she was not a direct victim, explained that the organization, where she works, runs a thrift society, and that they invested the money contributed by members into the scheme. She disclosed that the money ran into millions of naira.
During the last court appearance, Obi pleaded with the court to lighten his bail conditions, so that he could leave prison, to go and look for ways to refund his victims.
He told the court that his traditional ruler was too old and couldn’t come to court to stand surety for him. But some of his victims told our correspondent that Obi was lying.
They explained that Obi had no reasonable person that cared enough to get involved in the cleric’s fraudulent mess; hence nobody was coming or ready to stand surety for him.
Follow Us on Twitter!