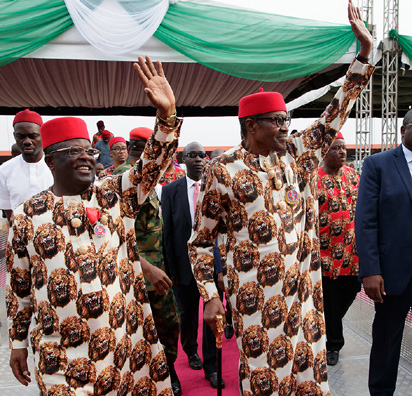 The David Umahi Nweze Akubaraoha Ebonyi Transformation Agenda (DUNAETA) has described the two days working visit of President Buhari to Ebonyi State as not only historical, monumental, epochal but affirmation of Governor Umahi as a hero and an asset to Ebonyi State and Ebonyians.
Lady Monica Ada Chidinma Eze the President and Founder of a vibrant and virile grassroots NGO, (DUNAETA) stated in a statement that “history is made today in Ebonyi State as she becomes the first State in Nigeria to be visited by the peoples’ President, President Muhammadu Buahri with the Nation’s elegant First Lady, Mrs. Aisha Buhari on a working visit since he assumed office as the fifth democratically elected President of Nigeria on May, 29, 2015 and the first State that Mr. President will be passing a night apart from his home State, Kastina.
To have succeeded to cause Mr. President to embark upon this visit considering his ever busy schedules places Governor Dave Nweze Umahi not only as a true leader but a great asset and blessing to Ebonyi State and the entire Ebonyians. The visit is not hinged on any issue apart from coming to commission avalanche of projects executed by a man of destiny who within less than three years turned Ebonyi State from one of the most backward States to one of the most advanced States in Nigeria by today.


Mr. President will be expected to commission many projects like two number 700 meter twin overhead bridges at Akanu Ibiam and Offia Nwali roundabouts respectively, a pedestrian overhead crossing at Ebonyi State University permanent site gate, the Abakaliki urban internal road network which has a total distance of 500 kilometers, the 18.5 kilometer Nkwegu - FUNAI road, the remodeled Abakaliki Township Stadium which has a fully air-conditioned V.I.P. stand, a fully-equiped virology centre at the Federal Teaching Hospital II, Abakaliki, the street lights projects in all the streets in Abakaliki municipality as well as the five ornamental water fountains.
Another project that would receive presidential stamp is the famous Ebonyi mall that is modelled after the famous Dubai mall. President Buhari is expected to lay a foundation stone of that mall which he will also come back to commission within the next 12 months.
The state government is also building a tunnel that dovetails into a flyover that is parallel to the existing flyover at Akanu Ibiam junction. And Mr. President is also to lay the foundation stone and that flyover bridge will be named after him. This project has 12 months completion period.
There is also a federal Road that is 14.5km that the governor got the consent of Mr. President to build and the road is fully done. Also fully ready for commissioning is the 18.5km road leading to the Federal University, Ndufu Alike Ikwo which was done with concrete and overlaid with Asphalt.
Worthy of mention too is the 15.5km of Nigercem road that passes through the first cement factory in the country which is in Ebonyi State and connects to Benue. The 15.5 km in the axis of Ebonyi built with concrete is ready for Mr. President to commission. 23.5km of state road which the governor built with concrete is equally ready for Mr. President to commission.
Engr. Dave Nweze Umahi the Executive Governor of Ebonyi State, Co-Chairman of the Southern Governors’ Forum, South East Governors’ Forum and recipient of the 2016 Zik’s Award for leadership has demonstrated capacity to take Ebonyi State to the Eldorado asclose watchers of Ebonyi State politics can easily agree with us that Governor Umahi is by all standards a revolutionist, an embodiment and true light of democracy in the politics of Nigeria and a man whose passion for excellence in governance knows no bounds.
Lady Monica Ada Chidinma Eze Aka Ada Ebonyi who is also the Technical Adviser (TA) on Media to Governor Umahi, further stated that this visit will expose the true enemies of Ebonyi State and her people whose only stock of trade are peddling of rumours, watering the burgeoning blackmail industry in Ebonyi state, spewing lies of nonperformance, ineptitude, tyranny and a host of other unprintable crimes against the Governor and the government of Ebonyi state for what they are. Contrary to the position of some misguided elements in the State, this visit also testifies that Ebonyi State rightly elected a true leader to govern her at this moment.
Finally, we wish Mr. President happy and successful stay in a State he can consider as his second home State as we plead with Engr. Dave Umahi not to relent until Ebonyi State takes its rightful position in the comity of States in Nigeria.
Follow Us on Twitter!