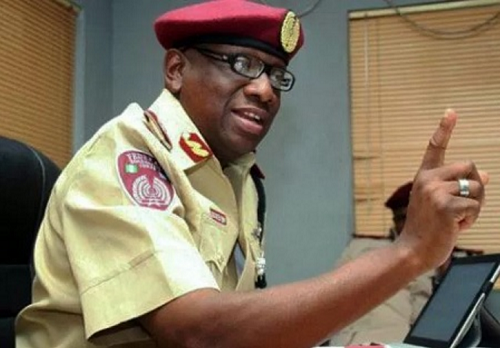 Transparent For Equity(TE), has accused Boboye Oyeyemi, Corps Marshal  Federal Road Safety Corps of secret recruitment in the name of replacement without the laydown procedures
The ongoing ‎concealed recruitment is shrouded in secrecy between top echelon of the corps and some highly placed Nigerians In defiance of civil service rules and not in tandem with federal character procedures
The Corps Marshal has jettisoned series of request from individuals, the National Assembly , other prominent Nigerians only to resort to mass recruitment through replacement of proxies, friends and family members to the detriment of the general public

It was revealed that the current replacement exercise will occupy more than 70 percent vacancies and by January 2018 when the adverts. For placement  ‎in the corps is rolled out, only 30 percent will be left for the public to contend

Several visits to the commission to seek audience with the Corps Marshal prove abortive as director of corps information deliberately refused to comment on the present development in the commission in relation to the replacement
Mass recruitment into the FRSC was conducted during the time of Osita Chidoka as the current leadership of the commission had deliberately refused to carry out such exercise but engaged in only 'replacement' pave way for their preferred candidates
It was further revealed ‎that a syndicated job for cash was unveiled in the corps ranging from 200,000,00 to 500,000,00 depending on the highest bidder as efforts are been made to unravel the officers involved
The civil society group has however resolved to petition ‎the committees of the National Assembly to probe into grievous allegation of secret employment in the corps
Follow Us on Twitter!