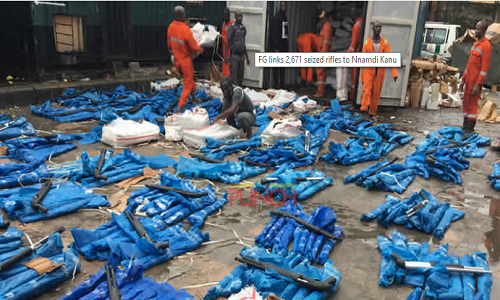 Ade Adesomoju, Abuja
The Federal Government said on Tuesday that the 2,671 pump action rifles illegally imported from Turkey but intercepted by the Nigeria Customs Service  on four different occasions in 2017 alone could be linked to the leader of the Indigenous People of Biafra, Mr. Nnamdi Kanu.
This was part of the submission made by the Solicitor-General of the Federation and Permanent-Secretary, Federal Ministry of Justice, Mr. Dayo Apata, while opposing IPOB’s motion filed before the Federal High Court in Abuja to challenge the court’s order proscribing it and designating it as a terrorist organisation.
The Federal Government disclosed this in a counter-affidavit filed by the Office of the Attorney General of the Federation and which was deposed to by a litigation officer in the Department of State Services, Mr. Ayuba Adam.
Adam, who disclosed in the counter-affidavit that IPOB was a violent group pretending to be non-violent, said a Turkish citizen, Abdukadir Erahraman, visited Kanu sometimes in July 2017 when he was urging “Biafrans to rise up and fight a good fight for freedom.”
Drawing a link between the Turkish citizen’s visit to Kanu and the arms smuggled into Nigeria, the counter-affidavit added that the NCS had intercepted 2,671 rifles smuggled from Turkey in 2017 alone.
The counter-affidavit read in part, “That a Turkish citizen, Abdulkadir Erkahraman, visited Nnamdi Kanu, the leader of the respondent/applicant in Isiama Afara, Umuahia, Abia State sometimes in July 2017, and has been canvassing support for the secessionist agenda of the respondent/applicant. He also admonished Biafrans to rise up and fight a good fight for freedom.’
“That the Nigeria Customs Service had on four occasions this year intercepted pump action rifles totalling 2,671 illegally imported into the country. Copies of the report on arms smuggling is attached herewith and marked as Exhibit FGN 2A and 2B.”

But IPOB, through a further affidavit filed by its counsel, Mr. Ifeanyi Ejiofor, on Monday, denied any link to the intercepted weapons.
The further affidavit stated, “That contrary to the erroneous deposition in paragraph 6(h) of the applicant/respondent’s counter-affidavit which is denied, the alleged pump action rifles totalling 2,671, illegally imported into the country from Turkey, was not directly traced to Nnamdi Kanu or anyone associated with him.”
The Acting Chief Judge of the Federal High Court, Justice Abdu Kafarati, had on September 20, 2017, made an order proscribing IPOB and designating it as a terrorist group upon an ex parte application by the Attorney General of the Federation and Minister of Justice, Mr. Abubakar Malami (SAN).
But in a motion filed by the group before the same judge on September 22, the group contended that the proscription order was unconstitutional.
The motion was anchored on 13 grounds, first of which was that the proscription order was made without jurisdiction “as the order was granted against an entity unknown to law”.
The AGF office subsequently filed a counter-affidavit justifying the proscription order of the court.
Justice Kafarati heard the two parties on Tuesday after which he adjourned until January 17 for ruling on whether or not the proscription of IPOB should be proscribed.
But the Federal Government insisted on Tuesday that IPOB was a violent organisation.
It stated Kanu was toeing the path that led to the Rwandan genocide by referring to Nigeria as a zoo.
It also cited a newspaper publication of September 18, 2017, in which the leader of the Biafra Independence Movement and founder of the renowned Movement for Actualisation of Sovereign State of Biafra, Ralph Uwazuruike, “attested to the violent conducts of IPOB members when he condemned the attack on members of his group and killing of the policeman by IPOB supporters.”