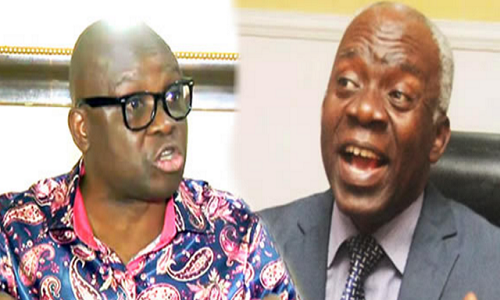 Kamarudeen Ogundele and Oladimeji Ramon
The Governor of Ekiti State, Mr. Ayodele Fayose, has criticised human rights lawyer, Mr. Femi Falana (SAN), over the allegation by the Attorney General of the Federation, Abubakar Malami (SAN), linking the lawyer to a N1bn property on Gana Street, Maitama, Abuja.
Fayose said it was embarrassing, shameful, disgraceful that a man of Falana’s standing, reputed to be a human rights activist, friend of the masses, crusader of justice and defender of democracy, could be linked to such a scandal.
The embattled former chairman of the defunct Pension Reform Task Team, Abdulrasheed Maina, had accused Falana of buying the building which was one of the properties he helped to seize from suspected pension thieves and handed over to the Economic and Financial Crimes Commission.
Malami had while testifying before the National Assembly last week, echoed the allegation, saying the property was sold to a ‘Lagos lawyer.’
Reacting in a statement on Monday, Fayose said it was sad and shameful that Falana could be “cited in such an odious, obscene, and offensive conduct.”
He said it was not surprising that Falana had taken it upon himself to always defend the EFCC, even when the anti-graft agency acted lawlessly, since the lawyer was allegedly benefitting from the EFCC.
Fayose said, “Linking Falana to illegally-acquired properties seized by the EFCC is bad enough but the facts provided by Malami make the case against Falana even worse. This must be the real reason why Falana always fall head over heels in defence of the EFCC and Magu, not minding the vicious violations of the constitutionally-guaranteed rights, freedoms, and liberties of citizens.

“What we have always suspected has now been confirmed publicly and by no less a person as the Attorney General of the Federation and Minister of Justice.
“Falana’s alleged unprincipled and disgusting defence of the EFCC and Magu’s penchant for disrespect of the rule of law and due process is for selfish reasons and personal gain.”
Fayose said the Federal Government must investigate Falana and not allow the matter be swept under the carpet.
But reacting to the call for his probe by Fayose, Falana, in a telephone interview with one of our correspondents, lambasted the governor for failing to pay attention to his earlier explanation on his connection with the property.
He challenged Fayose and the AGF to approach the court to seek a forfeiture order on the N1bn property if they were sure it was proceeds of crime.
Falana said, “I stand by my earlier defence that I never bought the house from the EFCC and I challenge him (Fayose) and the Attorney General to show the evidence. I challenge the garrulous Governor of Ekiti State to prove the monstrous allegation that I bought a house from the EFCC.
He added, “Since Mr. Ayo Fayose has not paid attention to the fact and circumstances of the case, I advise him to study my explanation that the house in question is a subject matter of a pending suit before the Federal High Court and that the house has been forfeited to AMCON in the interim.
“The EFCC is not a party to the case. So, if Mr. Ayo Fayose wants to join the suit, he’s free, he is at liberty to approach the Federal High Court holding at Abuja to prove his allegation. But his is a case of Ajegbodo to nweni kun ’ra. (The one recklessly eating fresh yam will always want to co-opt others into the deal.) .
“As of today, he has already forfeited six houses to the government of Nigeria. So, if he is sure that that this is proceeds of crime, he should apply to have it forfeited. He should contact the Attorney General, Mr. Malami, to apply to have the house forfeited, if they are sure that the house is proceeds of crime.”
Falana said the governor had been looking for a way to attack him “since I pressured the state to charge Mr. Fayose and his armed goons with the cold-blooded murder of Dr. Ayo Daramola and Tunde Omojola.”