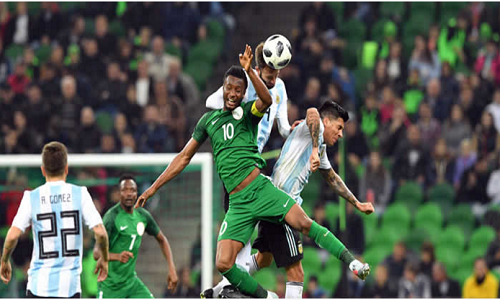 Festus Abu
Argentina coach Jorge Sampaoli came under fierce attack  after La Albiceleste’s stunning  4-2 defeat by Nigeria in their friendly match in Krasnodar, Russia, on Tuesday.
The Super Eagles recovered from  2-0 down to beat the Lionel Messi-less South American powerhouse after they  ran riot  in the second half at the Krasnodar Stadium.
And Argentina fans, whose team had beaten Nigeria four times in a competitive affair  and once in a friendly encounter, had expected a whitewash.
But goals from Kelechi Iheanacho, Brian Idowu and Alex Iwobi’s brace downplayed Ever Banega’s 28th-minute strike and Sergio Aguero’s 36th international goal on the night.
Sampaoli, who guided Chile to the 2015 Copa America title, was criticised by fans of the two-time world champions after his team squandered a comfortable 2-0 lead.

The majority of the former Sevilla manager’s critics on social media questioned  his tactical nous as they expressed their apprehension whether his team would perform at next year’s World Cup.
“Sampaoli has less football idea than my old one,” Valeentin  Moran wrote on Twitter.
“Sampaoli does not have to direct the national team anymore,” Pablo Almeiraa wrote.
But Sampaoli defended his team, saying they did their best to win the encounter.
He told LA NACION, “The team has the ability and individuals  to overcome these incidents, but  we have to improve.
“As for the positive ones, there is one  game, the mastery of some situations that without being executed were very close to the idea that we propose in training.”