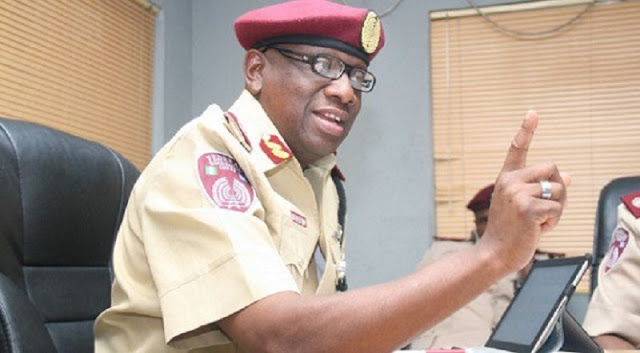 Dr Boboye Oyeyemi, the Corps Marshal, Federal Road Safety Corps (FRSC), has advised motorists to drive safely, and not to blame accidents on blood sucking demons attached to ember months.
Oyeyemi gave the advice during a lecture themed: “Ember Months; Road Traffic Crash Myth Debunked” on Friday in Lagos.
The corps marshal said that people were too religious during the ember months by attaching all sorts of spirituality to the months rather than advising the drivers to be cautious and drive carefully.
“There are no blood sucking demons on the roads during ember months; we are too religious in this period of time about the road.
“A drunk driver speeding at 140 kilometers per hour, how will the end of the journey will be?
“This programme is meant to debunk the mythology that more people necessarily die during ember months than any other months,” he said.
Oyeyemi said that some 5,000 drivers had been sent to government hospitals for emotion and psychology tests, with majority of them not being psychologically balanced.
According to him, it is improper to drive while listening to music or on phone call with an earpiece.
He said that the FRSC was working hard to increase the fine from N4,000 to N50,000 for the offence of using phone while driving.

“We are trying to bring stiffer punishment to erring motorists who disobey the traffic rules and regulations
“We are increasing the penalty from N4,000 to N50000 and N100,000 depending on the type of offence committed.
“The bill has reached second reading at the National Assembly; hopefully, very soon it will become a law,” Oyeyemi said.
Mr Chris Nwandu, the General Coordinator, FRSC Celebrity Special Marshals, said that the journey of celebrity special marshal started in 2011 in Lagos State.
Nwandu said the scheme is for those who are ambassadors of safety through the means of various platforms either as journalists, broadcaster, comedians, actors or other showbiz platforms.
“Over the years, we have credibly performed our duties and mandate establishing the unit.
“Some of our achievements include quarterly patrols, advocacy and enlightenment campaigns at various locations in Lagos state, Abuja and Abeokuta,” he said.
According to him, the FRSC celebrity special marshals have also produced several jingles and television commercials on road safety.
Mr Olu Jacobs, a veteran actor, said that majority of drivers, especially in Lagos state, needed a change of attitude on the wheel.
Jacobs advised the drivers to be patient, careful and consider other road users while driving.
Follow Us on Twitter!