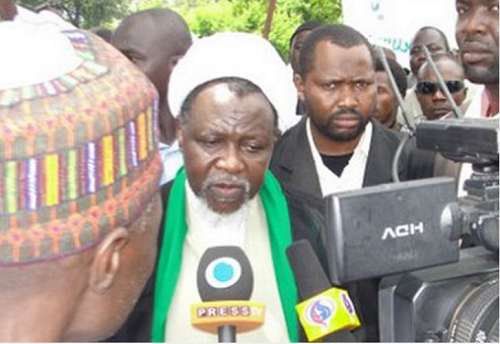 The Coalition Of Civil Society Organizations For Transparency and Good Governance (COCSOTGG),  has called on the Presidency and the Attorney General of the Federation to act fast in designating the  Islamic Movement of Nigeria, (IMN) a Terrorists group before it’s too late.
The group said if care was not taken to curb the situation, IMN might snowball into another disaster in the country.
COCSOTGG was reacting to the recent clash between police and some members of the Islamic movement who had gone to the unity fountain to protest the detention of their leader, El Zakzaky over acts of terrorism.

The national president of COCSOTGG, Patriot  Sabo Ode said  Nigerians shall no longer accept the complacence of the AGF on the continuous existence of the Islamic Movement in Nigeria.
According to him, it is a direct threat and danger to the peace-loving and law abiding citizens.
He said, "We deserve to live and survive in our country,  free of molestations or phobia of violence in whatever guise."
Ode said if the AGF fails to initiate the necessary action now, the IMN  sect, which by the estimation of all right thinking members of the society, is  worse than Boko Haram terrorists  will re-enact the regime of bomb attacks in Abuja or elsewhere in Nigeria.
His statement reads, "We are neither the least nor the most concerned about the security of our dear nation, Nigeria. But when we see national security drifting dangerously and fired with impunity by some violent sects, the dire consequences stare us in the face and, we are thus, prompted to voice out, as time has dictated at the moment.
"We fanatically believe, it is our collective responsibility as people of a united federation called Nigeria to work towards those things that perch peace in our hearts and minds, neighborhood or anywhere in the country, than violence.  So, our unadulterated convictions points to the natural understanding that violence solves no problem; but peace and dialogue are universal antidotes and, indisputably, the keys which prosper nations around the world. We reiterate that the extent or magnitude of bravado does not post any useful results to any of the parties in a rivalry.
"Therefore, COCSOTGG was prompted into speaking to the Nigerian public again, because Nigerians appear to be very complacent with what we consider to be a thorough misbehavior, affront   and assault on our dear nation, with the siege on Abuja in numbers, exceeding 10, 000 by Shiites members (IMN). Their leader, Shiek Ibrahim El-Zakzaky has taught them everything, except the rule of law or subordination to lawfully constituted authority and government of the Federal Republic of Nigeria (FRN).
"We are not interested in scratching the bruises of old wounds and the damage to Nigeria, wrought on us by  the IMN   sect  in the last 40 years, operating illegally and unregistered in  Northern Nigeria.  Even their fellow Muslims oppose them vehemently, faulting their style of public worship in lengthy processions, with assorted weapons, as strange, alien and unacceptable.
"We have observed that members of the Islamic Movement in Nigeria, who though claim some religious activity, but are unfortunately, always combat-ready and striking any ideologically unaligned persons with awesome unprovoked violence and murder. And also, both leaders and adherents boldly profess allegiance to the Islamic Republic of Iran (IRI) and affiliation with ISIS, as their mentors and sponsors of this bizarre version of Islamism in Nigeria. Iran is the most notorious terrorists’ nation in the world, which has “proudly” defied even the United Nations on promotion of terrorism.

"Emboldened by this background, IMN sect members breach laws of the Nigerian federation with impunity and dares everybody, with a confounding recklessness or ruthlessness. From their Spiritual Head Sheik, El-Zakzaky to incensed aficionados, they all hunger to test their intolerable tempestuousness on the Nigerian public anytime, anywhere, so courageously.
"We are not just worried, but concerned that members of the Islamic Movement  in Nigeria have consistently and persistently shown disregard to the laws of our country. What is of utmost concern to them is how to clandestinely impose another version of terrorism, garbed in the fake coats of Islam on the rest of us.
"May we remind Nigerians that Boko Haram terrorism started, to paraphrase, President Muhammadu Buhari on his inaugural day speech to Nigerians,  as  “small fires, now causing large fires.” None of us is oblivious of the pains and sorrows inflicted on us by Boko Haram terrorists, because we allowed it blossomed, unchecked in celebration of some faulty and indiscernible liberties of democracy.
"Displaying their familiar tradition in the week, just ended, IMN sect members again assailed Abuja in incredible thousands. Some media reports pegged the number as much as 10,000 sect members. Now, it’s rare to even have a presidential political rally in Abuja, boasting of this astounding crowd  organized by IMN terrorists . How did anybody mobilize terrorists  in such astonishing numbers into Abuja for a protest?  Something must be amiss somewhere and some people delight in it.
"It is the same siege they laid on Zaria City in Kaduna state.  It is the same unlawful siege on Kano, Yobe or other states in the North.  No one noticed the potential danger at the budding stage. And the Shiites sect expanded to what it is now, extending to Abuja, after Kaduna state Governor, Mallam Nasir  el-Rufai outlawed the sect at the state level.
"In Abuja on their so-called “peaceful” protests, the IMN  sect members did not only  hurl insults and held  the sovereignty of the Federal Republic of Nigeria to ransom and in contempt, but stoned the Police, the only civil security agency mandated by law to supervise their lawful protests.  Police were compelled to necessarily use teargas canisters’ to disperse the unruly Shiites rented mob."
"The Coalition will be left with no option but to mobilize Nigerians against the Office of the Attorney General of the Federation and to pass a vote of no confidence on him until he resigns from the office which he holds in trust for the rest of us. Enough is enough of the IMN threats which is already a negative signal within the FCT in view of their recklessness and violence posture to inflict pains on anyone without looking back."
Follow Us on Twitter!