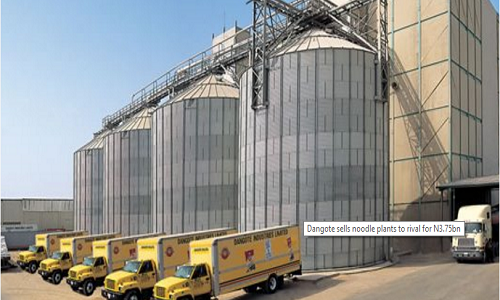 Stanley Opara with agency report
A unit of Dangote Flour Mills, Dangote Noodles Limited, has sold two production lines to rival pasta maker, De United Foods Industries, for N3.75bn ($12.26m), the company said on Tuesday.
De United said it had signed an agreement with Dangote Noodles to buy plants at its Ikorodu and Calabar factories. It will also buy stock worth N383.94m, according to a report by Reuters.
The deal comes after Dangote sold a small stake in its cement business to foreign investors in a one-off stock market deal valued at N27bn.
Dangote Flour Mills, majority owned by Africa’s richest man, Aliko Dangote, had said it wanted to quit the noodles business to focus on flour and pasta production.

Nigeria’s noodle market is fiercely competitive and De United, with a market share of around 70 per cent, is seeking to consolidate the sector.
Privately-held Dangote Industries Limited, with interests in agriculture, real estate and truck assembly, bought back the flour unit it had sold to South Africa’s Tiger Brand for $1 in 2015 after it posted losses.
Shares in Dangote Flour Mills have more than doubled so far this year after rising by 276 per cent last year. The stock price was down by 3.17 per cent on Tuesday at N9.20 naira.
Dufil Prima Foods, the parent of De United Foods, is a privately held company set up over two decades ago, which has grown to become the largest pasta maker in West Africa.
De United said the transaction had been approved by both companies and the regulators.
A banking source close to the deal said that De United would continue to produce noodles under the Dangote brand for two years after the acquisition.
In July Dufil Prima Foods said it would raise N40bn in the local debt market to broaden its funding base.
Follow Us on Twitter!