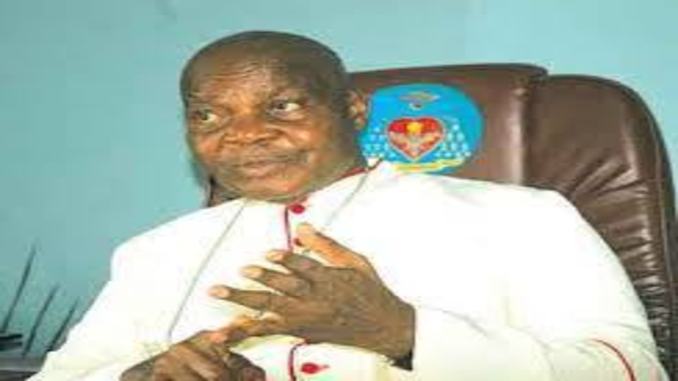 A former President, Christian Association of Nigeria, Cardinal Olubunmi Okogie, has asked the administration of President Muhammadu Buhari why life is becoming harder for Nigerians after it promised them change.
The former Catholic Archbishop of Lagos asked the question in a piece entitled, ‘The Truth and Nothing But the Truth,’ on Tuesday.
Okogie said 2018 was just a few days away but in the horizon of Nigerian politicians, it seemed 2019 would come before 2018.
He said by their speeches, conduct and posture, “even the blind is able to see that preparations for the 2019 elections are already in top gear.”
The outspoken cleric, however, decried that in utter disregard to internal party democracy, candidates and sole candidates were already being endorsed, a development he pointed out did not portray politicians in good light.
“With very few exceptions, they are powermongers pretending to be leaders, parasites posturing as benefactors,” he stated.
Okogie said, “Endemic to our political class is an addiction to power, a chronic deficiency of desire to serve. It is becoming clearer that, for our politicians, being in power takes precedence over service to the people. In another sad reminder that they care less for the people, they are not engaged in discussions on how to alleviate the suffering of the masses, suffering visited on the people by the incompetent leadership of this country.
“Nigerian politicians benefit from a system that places the citizen at a disadvantage. They treat the people with contempt. But we the people too must be responsible for our country. If the political class is out to deceive the people, we must put some questions to our politicians. We must insist on credible answers to a number of pertinent questions.
“What, for example, happened to all the lofty promises made during the campaign season that preceded the 2015 elections? Why are our politicians unwilling to be accountable? Why is transparency in government a taboo? Did they not promise to change this country into a paradise? Why is it, then, that life is getting even harder for the average Nigerian? Why is the level of insecurity so high that people are abducted even from their homes? Why has our country’s leadership failed to create an environment for investments to thrive?”

The cardinal stressed that it was “immoral and reprehensible” that there was a glaring absence of internal democracy in the country’s political parties, while the people seemed not to have got over “the flu of sole candidacy.”
He said, “That too raises a question. Are our politicians democrats or impostors? If they are ever ready to manipulate the process within their parties, are institutions vital for democracy safe in their hands? If, as it is, our politicians have obstinately refused to imbibe a democratic culture, are they not agents of instability?
“A government that is more powerful than the people is not accountable to the people. It does not consider transparency a sacred obligation.
That is the situation as we write. Our government is not accountable to the people. Even when government functionaries are invited to the National Assembly to answer some questions, they arrogantly fail to honour the invitation. And they get away with such insolence!
But that is not what we need in Nigeria. For in a veritable democracy, the government is at the service of the citizen. Such is the profound significance of going to the polls.
“The citizen hires his president, governor, senator, etc. If the people are not satisfied with their performance, those they hired are fired at the polls. But that remains a tall dream in Nigeria where, precisely because those we hire are more powerful than their employers, they are in a position to perpetuate themselves in office through an electoral process whose integrity exists only in the breach.”
The retired bishop added that the country could not take its rightful place in the comity of nations while the political class imposed its “counterfeit democracy of sole candidates and ‘divinely’ anointed contestants on the rest of us.”
He called for all all who want to contest in the 2019 elections to go through due process within their parties.
According to him, when they would have been duly nominated to contest, they must see it as a moral obligation to participate in nationally televised debates.
Source: The PUNCH
Follow Us on Twitter!