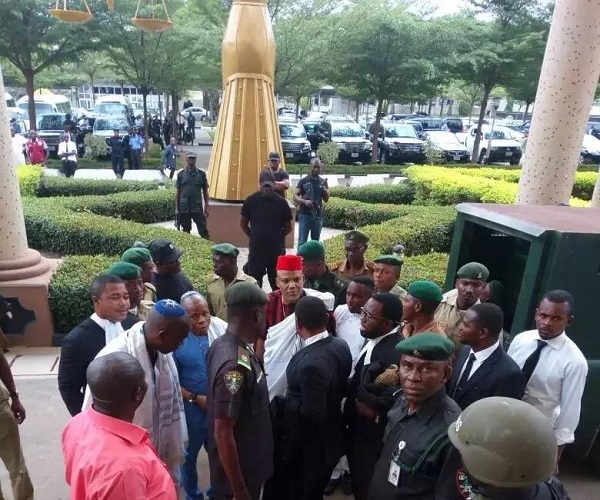 The Federal High Court in Abuja on Monday adjourned the trial of the leader of the proscribed Indigenous People of Biafra, Nnamdi Kanu, until December 5. Kanu is being prosecuted alongside others on charges of treasonable felony.
The case was adjourned due to the absence of ‎the trial judge, Justice Binta Nyako, who was said to be attending the ‘All Judges’ Conference’ being held at the National Judicial Institute, Abuja.
Kanu was on Monday absent from court for the second time after the alleged invasion of his home in Abia State by the military on September 14, ‎since when he had been declared missing by his family.


His co-defendants and a serving Senator, Eyinnaya Abaribe, who is one of the three persons standing as sureties for the bail granted the IPOB leader, was however in court on Monday.
Kanu’s lawyer, Mr Ifeanyi Ejiofor, told the judge on October 17 that Kanu had been missing after soldiers allegedly invaded the IPOB leader’s home‎ on September 14, 2017, adding that the Nigerian Army was in the best position to produce the defendant.
Follow Us on Twitter!