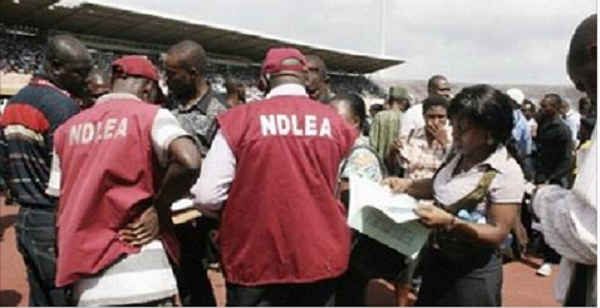 The National Drug Law Enforcement Agency ( NDLEA ) yesterday in Kano destroyed over 54, 244, 639kg of assorted narcotic drugs worth over N10 billion.
Speaking during a brief ceremony witnessed by Kano state Governor, Dr. Abdullahi Umar Ganduje, the state NDLEA chairman and Chief Executive, Col. Muhammad Mustapha Abdallah (rtd) raised the alarm over the high rate of Nigerian youths and women engaging in drug abuse and trafficking.
According to him, the future of our youths should be paramount and from indication, with the involvement of them in drugs, the Federal Government must take immediate action to redeem their future and also tackle the menace of drug abuse.
He added that, “in as much as the tonnage of the seized drugs for destruction today is a clear indication of a good performance by NDLEA, for 54.244 metric tons of drugs to be intercepted from a particular state in no such a long period of time is of unacceptable magnitude and quiet worrisome. It speaks of the extent and prevalence of these deadly substances in the state.”
Giving details of the seizure, the NDLEA state Commander, Hamza Umar, said it was a collective efforts of the state Command and the Malam Aminu Kano International Airport (MAKIA), NDLEA Command.

He said in all the figures, Cannabis Sativa was 11, 504.822kg, Psychotropic substances 42, 700.27kg, Cocaine 26.187kg, Heroine 13.360kg, adding that, “all the achievements would not have been possible without the full support of a visionary leader, His Excellency Governor Abdullahi Umar Ganduje who provided condusive atmosphere to operate.”
Umar also hailed the effort of the Joint Task Force that involved all the security agencies would not have worked positively without Ganduje’s moral and financial support, adding that the operational vehicles of the Command were mostly donation from Kano state Government.
The NDLEA boss also used the opportunity to appeal to Governor Ganduje to facilitate the completion of rehabilitation centre which he said when completed will help in discouraging youths against the dangers of drug abuse.
In his address, Governor Ganduje promised continuous support to NDLEA, just as he thanked Kano people, particularly the Kano Concerned Citizens for their effort in curbing the menace of drug abuse among youths in the state.
He added that apart from donating operational vehicles to NDLEA, his administration has continued to support the agency financially and otherwise, including the creation of a Special Taskforce that is aiding the agency in the fight against drug abuse.
In his speech, the Special Assistant to President Muhammadu Buhari on Youths and Students Affairs, Nasiru Adhama, regretted that crimes committed by youths are mostly caused by drug abuse.
He advocated for more funding to the NDLEA, pointing out that, “how can the NDLEA fight drugs trafficking with meager Capital Budget of N127 million and total overhead of N393 million in 2017?”
Follow Us on Twitter!