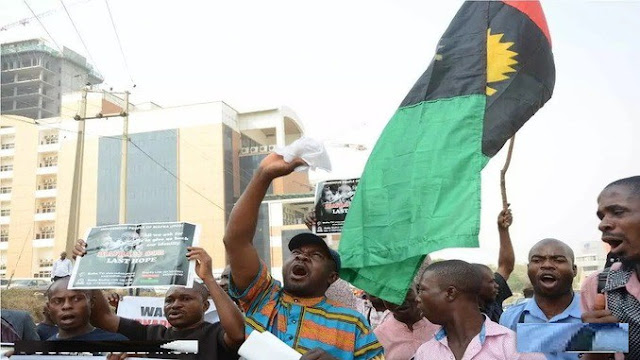 The Indigenous People of Biafra (IPOB) threatens Anambra voters one week to the state’s guber election
IPOB threatened voters with death if they come to vote on Saturday, November 18 – IPOB’s media and publicity secretary, Emma Powerful, noted that the election boycott will give the group’s agitation a global momentum needed
Ahead of the Anambra state governorship election the proscribed Indigenous People of Biafra (IPOB) has threatened voters with death if they vote, vowing to disrupt the election, The Punch reports.
The members of the group we gathered marched around some streets in Onitsha, Anambra state on Friday, vowing a lockdown on the day of the election. In videos of the march circulating online IPOB members were seen threatening voters.
They said: “If you vote you will die. Don’t go out, stay in your house. If you vote on November 18, you will die. We are not running around for the zoo. “There will be no election. We will not participate, we will not vote.
Nothing concerns us with any election. We are formidable. “We are in Onitsha to tell the Federal Government to produce Kanu. They should release all the Biafrans in Nigerian prisons.” IPOB’s Media and Publicity Secretary, Emma Powerful, speaking to The Punch noted that the purpose of the demonstration in Onitsha was to show the world that “the threat of bullet” would not stop the group from realising its aim of having Biafra Republic.
He said Igbo people living outside the South-East should contact their families at home to boycott all future Nigerian elections, including the governorship election. He said, “Today in Onitsha, we broke the python Buratai, Ohanaeze, Obiano and Igbo governors brought to our land.

Anybody doubting the resolve of IPOB under the supreme command of Nnamdi Kanu is mistaken. “We will put Anambra State on lockdown on November 18. This is a taste of what is to come. Nigeria should be prepared.
“It is also very critical to inform every Biafran, be you IPOB family member, businessman, farmer, artisan, driver, teacher, doctor, motorcycle/tricycle union, civil servant, trader, market leader, National Union of Road Transport Workers, National Association of Road Transport Owners, fisherman, market men and women, including politicians who believe in freedom and liberty of a free independent State of Biafra, to boycott the Anambra State election.”
The secretary further said that the election boycott will give IPOB’s agitation a global momentum needed to make world leaders accept a peaceful break-up of Nigeria. He added: “They will be morally bound to consider a possible date for Biafra’s referendum for independence without delay.
A vote in Anambra elections will mean electing into office the same people who, over the years, have been responsible for the death, pain, misery, agony and suffering of our people. We would have only succeeded in renewing our suffering for another four years.”
Follow Us on Twitter!