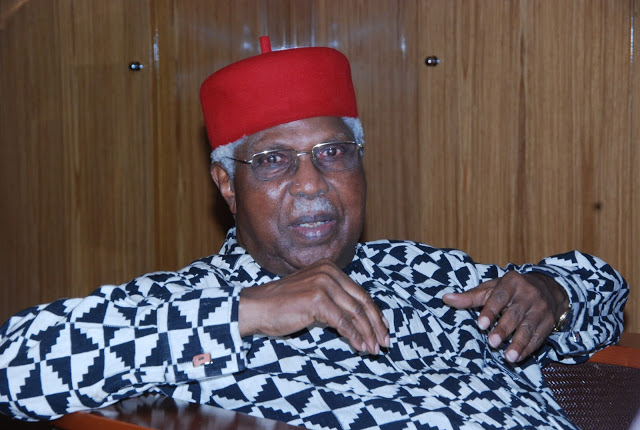 Elder statesman and  Second Republic Vice-President, Dr. Alex Ekwueme, has reportedly collapsed at his residence and was rushed to Memfys Hospital where he was admitted to the Intensive Care Unit for Neurosurgery.
The incident occurred on Saturday at his residence at Independence Layout, Enugu barely 10 days (October 10) after he celebrated his 85th birthday.
According to a family source who pleaded anonymity, ''the former Vice President  was trying to get something from the table when he suddenly collapsed and immediately someone raised the alarm, we proceeded to revive him while cautious enough not to attract neighbours''

Speaking further, he said “When it became obvious that he had lapsed into coma, we rushed him to a hospital (unnamed) in GRA (Government Reserved Area), but we were referred to Memphys Hospital by medical consultants who had critically examined his condition.”

“When there was no sign of improvement on Monday afternoon, we rallied round and informed the former governor of Anambra State, Mr. Peter Obi, who is like a son, and he has been making plans to fly him overseas,” the source added.
Governor Ifeanyi Ugwuanyi, according to the source, could not hold tears from rolling down in cheeks as he saw the elder statesman in a coma.
“My namesake, Ifeanyichukwu, do not leave us now! Even if you must go, please wait to see your daughter become the deputy governor of Anambra State before you leave us,” Ugwuanyi was reported to have wailed at the ICU.
Follow Us on Twitter!