BREAKING!! 26 Nigerian girls who died in Mediterranean buried amid Tears In Italy (Photo) 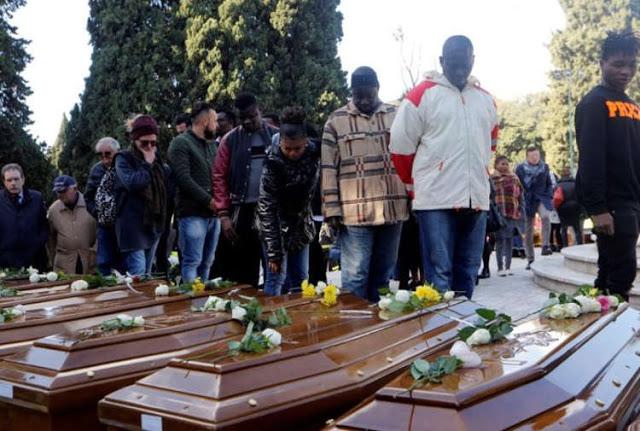 Twenty six Nigerian girls who died in the Mediterranean while crossing into Italy from Libya, were given a mass funeral and burial.
A Roman Catholic bishop and a Muslim imam both said prayers at the simple ceremony in the southern city of Salerno, with 26 wooden coffins laid out on a stone dais. A single white rose was placed on the lid of each.
Just two of the women were identified.
“It is very likely that these girls were victims of trafficking for sexual exploitation,” said Federico Soda, director UN migration agency IOM for the Mediterranean.
A recent IOM report had estimated that 80 percent of Nigerian girls arriving in Italy by sea might be trafficking victims.

The 26 bodies were retrieved from the sea on Nov. 3 by a Spanish rescue ship, while some 64 people were unaccounted for and feared lost, bringing the total dead to around 90, said Flavio Di Giacomo, an IOM spokesman.
Survivors found on nearby rubber boats said the women were all Nigerian and had left Libya hoping to make it to Italy.

The only two identified were named as Marian Shaka, who was married, and Osato Osaro. Both were pregnant. Some of those who died were believed to have been as young as 14.
Almost 115,000 migrants, mainly African men, have reached Italy so far this year, according to government data released on Friday, against just over 167,000 in the same period last year.
IOM said at least 2,925 people died trying to cross the Mediterranean from Jan 1.-Nov. 5 against 4,302 last year.
The Italian government has worked with Libyan authorities to block migrants from leaving the north African state, leading to a sharp fall in new arrivals since the summer.
The government says its policy has cut the number of sea deaths, while critics say it has left thousands of refugees and migrants trapped in appalling conditions in Libya.